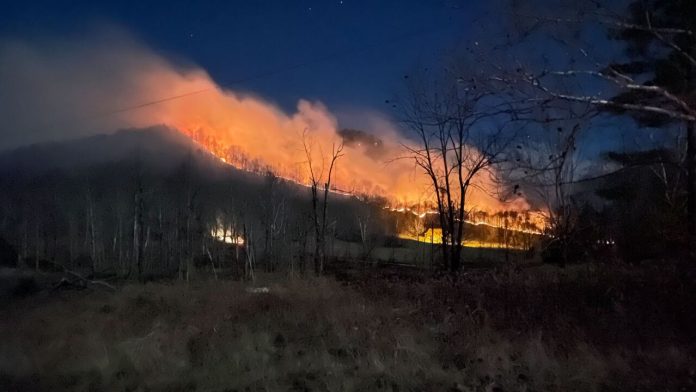 Yesterday, Mount Vernon Fire Department’s Chief Bales reported to FOX 56 News that a wildfire in Rockcastle county spread out of control of local fire authorities to a size of 1,200 acres. Since November 8, the fire spread from 200 acres to over 1,000 in less than a day due to low humidity, lack of precipitation, fallen foliage, and mild winds. While the fire raged on, winds carried the smoke north to Lexington, causing a campfire haze to blanket Lexington. If you smelled smoke on Tuesday morning, you were not imagining things; you can thank the wildfires across southeastern Kentucky.

Starting every year on October 1, the commonwealth prepares for its wildfire season, and this year–due to dry conditions and low rainfall–wildfires dotted across Kentucky have burned through thousands of acres of forest in and around the Daniel Boone area, causing some 27 counties to enact burn bans. Officials in Estill county declared a state of emergency on Tuesday following the spread of fires around the county. Forestry Department officials caution residents that evacuations were not necessary, but warned that fallen leaves should be raked away from houses in order to prevent the spread of fire from contained areas to residential zones.

Unless precipitation levels rise, then hundreds of acres of forest land lie in high risk of wildfires. According to the Louisville Muhammad Ali International Airport, precipitation levels in the commonwealth hit record lows this past October, and the trend shows no sign of relenting in the forecast of upcoming weeks. For at least the next month, the National Weather Service predicts below average chances of precipitation, especially in southeastern Kentucky, which could spell further worries for counties with burn bans already instated. These low precipitation levels only contribute to the ongoing drought affecting almost all of Kentucky. Fire officials will doubtless fight more fires, and residents of cities smell some smoke due to this winter drought. Luckily, the National Weather Service predicts that remnants of hurricane Nicole will travel up the Appalachians bringing much needed rainfall and moisture levels to dry areas of the southeast.