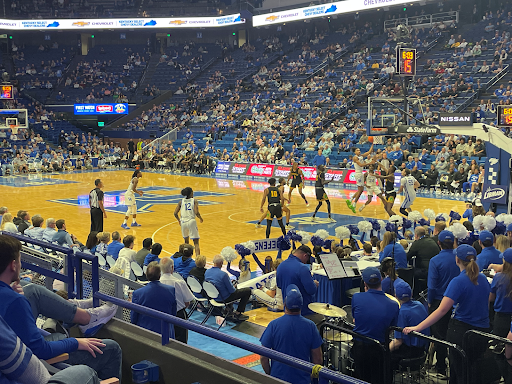 On November 3rd, the Kentucky Wildcats defeated the Kentucky State Thoroughbreds 111-53 in the final exhibition game for the Kentucky men’s basketball team before the start of the regular season on Monday, November 7th versus Howard University. The offensive showing by the Wildcats was doubly impressive considering the fact that the two returning starters from last year’s team, reigning National Player of the Year Oscar Tshiebwe and back to back SEC assists leader Sahvir Wheeler, were out for the game with minor injuries. The Wildcats are one of the several teams in the country that have returned several key pieces for this season and have legitimate ambitions of competing for a national title.

After a somewhat underwhelming performance in their first exhibition, a 56-38 victory over Missouri Western State, the Wildcats came strong out of the gate for this exhibition. After Kentucky State scored the first basket of the game, the Wildcats would go on a 32-5 run for the next 8 minutes of the game, ultimately taking a 61-25 lead into the second half, scoring more in the first half then in the entirety of the first exhibition game. The Wildcats would take their foot off the gas a bit in the second half, although they would still manage to break the century mark, coming away with a 111-53 victory. 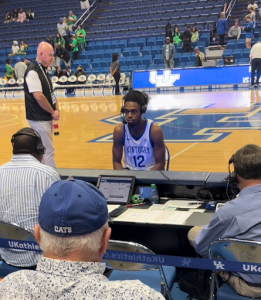 and Lance Ware was impressive, the leading scorer for the Wildcats would be Senior Antonio Reeves, who transferred to Kentucky from Illinois State during the offseason. Reeves would score 23 points, shooting 50% both in total and beyond the arc, while coming off the bench.  During a postgame interview, Reeves was very complimentary of the Freshmen on the team, saying, “They work hard everyday. I see them going 100% everyday. They even teach me stuff, like you [interviewer] said they’re beyond their years. Those guys are hard workers and they showed that during the game.” Freshmen Cason Wallace and Chris Livingston had impressive nights, scoring 12 and 14 points respectively. And Freshman center Ugonna Onyenso, while not lighting up the box score offensively, showed flashes of a future defensive stalwart, with 11 rebounds and 4 shots blocked.

Unfortunately, the reason a new starting lineup was needed was the fact that the top returning scorers from last year’s Wildcat team, Oscar Tshiebwe and Sahvir Wheeler, were sidelined due to injury. Tshiebwe, the reigning National Player of the Year and a projected All American, is still rehabbing from a minor knee procedure that he underwent in October. Head coach John Calapari has repeatedly emphasized the minor nature of the surgery, which was described as a cautionary measure, and in an interview after the exhibition said that they are continuing to hold Tshiebwe out simply as a cautionary measure. On the other hand, Sahvir Wheeler is continuing to deal with what has been described as a lower leg injury he suffered during the first exhibition against Missouri Western State. Calapari has described the injury as “short-term”, though a timeline for return remains unclear. Neither Tshiebwe nor Wheeler are expected to play in Kentucky’s first two games of the season against Howard and Duquesne, setting the November 15th game against Michigan State in Indianapolis as a possible return date for the two veteran players.

The Wildcats, ranked preseason No. 4 in the country, face a difficult non-conference slate to start the year. They face the Michigan State Spartans on November 15th as a part of the Champion’s Classic. A major test on the road comes five days later on the 20th, when they travel to Spokane, Washington to face the No. 2 Gonzaga Bulldogs. They face a pair of daunting neutral site games when they travel to London on December 4th to face the No. 22 Michigan Wolverines, and then travel to Las Vegas on December 17th to face the No. 8 UCLA Bruins. Finally, they wrap up the non-conference slate when they host No. 5 Kansas in Rupp Arena on January 28th. This is in addition to the SEC conference, where they are expected to take home the regular season crown over other contenders such as the Arkansas Razorbacks and Tennessee Volunteers. Ultimately, the one and only goal for the Wildcats this year will be to wash away the stench of last year’s disappointing finish and win the program’s ninth national championship.