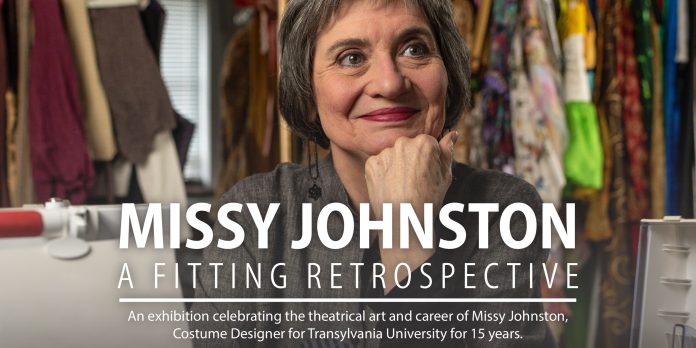 At the end of the 2021-2022 school year, Missy Johnston, long-time theatre professor, and costume designer, retired after 15 years working with Transylvania University and decades in the theatre industry as a whole. To commemorate Johnston’s illustrious career and her immense impact on Transy specifically, Morlan Gallery is currently hosting “Missy Johnston: A Fitting Retrospective”, an exhibition celebrating Missy Johnston’s theatrical art and career. In addition to the exhibit, Carrick Theater hosted a discussion between Johnston and the director of the Transy theatre program, Tasha Fowler, on September 15th. 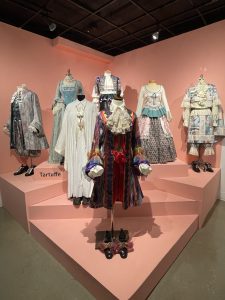 Missy Johnston grew up in Statesville, North Carolina, and first experienced theatre at the Stratford Shakespearean Festival in Stratford, Ontario during her sophomore year of high school. She would go on to earn a Bachelor of Arts in Theatre and Contemporary Humanities from Converse University and a Masters of Fine Art in Theatre Design and Playwriting from Trinity University. The bulk of Johnston’s graduate work took place at the Dallas Theater Center, where she stayed on as a journeyman after receiving her degree while receiving her first experience in set design and playwriting. She worked as a set designer at the Oklahoma Theater Center and Niagara University before moving to Lexington and working with several local institutions as a costume designer, such as KET, the UK Opera Theater, and the Lexington Children’s Theater. Johnston was hired by Transylvania in 2007 as a costume designer for the play Noises Off and worked with the theatre program all the way up until The Ballad of Bride and Blue in May of 2022.

The Morlan Gallery exhibit “Missy Johnston: A Fitting Retrospective” is a snapshot of Johnston’s life and career, from acting to teaching as a theatre professor. But the majority of the exhibit consists of some of the various costumes that Johnston designed and created while working with the Transylvania theatre department. One of the shows most prominently featured in the exhibit is Tartuffe, a classic Mouliere comedy dating back to 17th century France, which was performed at Transy in 2009. During the discussion, Johnston described creating all costumes for the show from scratch from 1980s drapery fabrics left in the costume workshop. This led to many last-second additions to the show, including the addition of the ornate coat the titular character adorns in the second act of the show, which was given to the actor on the night of the first performance. Johnston recollected during the discussion, “ I went running from the costume shop over to Little [Theater], threw it on him backstage, and said ‘You go, baby!’” 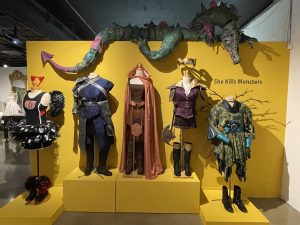 Johnston was able to collaborate with both the Transylvania and Lexington community during her time at Transy, which is demonstrated by the section in the exhibit for the play She Kills Monsters, a 2011 play about a woman who copes with a family tragedy through Dungeons and Dragons, which was performed at Transy in 2016. The exhibit features a large stuffed dragon that Johnston designed and created with the help of the Lexington Children’s Theater. In addition, many of the costumes for the show were designed with the help of Transy students. Students in a design class helped design armor and weaponry for the show, and gave sketches to Johnston, who interpreted them into actual costumes. Johnston was happy that students were able to see their visions come to life, saying, “To get to completely imagine something and then have it become real and have somebody walk on stage in it, that’s the great pleasure of this job.”

Many more of Missy Johnston’s shows are highlighted in the Morlan Gallery exhibit “Missy Johnston: A Fitting Retrospective”, from Marie Antoinette to Mr. Burns, a Post-Electric Play. The Morlan Gallery is open from 12 p.m. to 5 p.m. on weekdays and will be displaying this exhibit until October 7th.