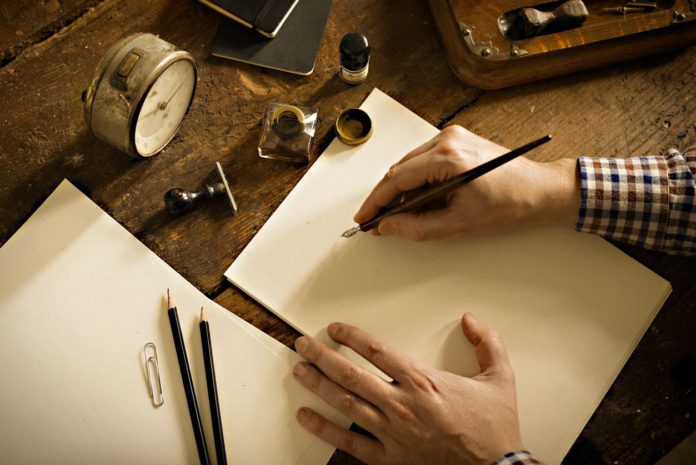 Before reviewing the medium of chapbooks, I think it’s important that it is understood what a chapbook is, and how they came to be.

Poetry chapbooks in the 21st century are recognized as a small collection of poetry. Though similar to an anthology, chapbooks are typically no longer than 40 pages and can have just as many poems. Often times, a page consists of one poem with all of the content being connected by a common theme of the author’s choice.

These small books originated as single sheets of print often posted to public forums between the 16th and 19th centuries, better known as broadsides. Though they had a civic function, the most popular broadsides were ballads, poetry, folk tales, and imaginative stories. They often reflected the oral history of the areas they originated and included woodcut illustrations due to the illiteracy rates of the time.

Broadsides transformed into chapbooks when the single sheet was folded into fourths, eighths, or sixteenths, then bound together by the purchaser. The woodcut illustrations remained now combined with a few memorable lines. The authors of chapbooks were often unknown, but their subject matter expanded to children’s stories, religious texts, and gossips. These pieces of literature acted as short-lived enjoyment and were often thrown out, reused, or deteriorated from frequent use.

Chapbooks get their name after the nomadic merchants who sold them: chapmen. These merchants, with a less than respectable reputation, were known for selling whatever they could and were important in spreading chapbooks to those without access to printed books.

As the production of chapbooks continued, their subject matter grew to include fiction and non-fiction that captured the politics, stories, and revolutionary ideas of the time. In England, chapbooks had been beaten out as the popularity of newspapers increased, but they continued thriving in Scotland and the United States.

The need for chapbooks declined throughout the 19th and 20th centuries, though they survived as small collections of poetry. They weren’t revived until the 1970s and ’80s in Britain. At this time, chapbooks, zines, and other non-mainstream publications circulated in an attempt to spread punk culture and other niche and sometimes counter-cultural groups. The structure of these chapbooks was sturdier: creators used the Xerox process at home, then bound the pages with staples in a saddle-stitch fashion.

In the 21st century, chapbooks are often used in literary groups. They are typically published by self-publishing writers with letterpress printers or home-printed and hand-bound by the writer themselves. The number of chapbooks printed is often limited, making the artistic quality more concentrated than the average book. However, because the small publication doesn’t qualify as a true publication, chapbooks can be used to showcase skill for possible publications in the future.

The use of chapbooks have drastically changed since their original appearance in the 15th century, but they have survived their transformation and the last seven centuries. Now, small collections of poetry can be found in our library or purchased in a publisher’s library. To find a list of chapbook publishers, please visit the website of the Poetry Society of America. This same site also offers a more extended history of chapbooks, as well as a guide to make your own chapbook. Happy reading!