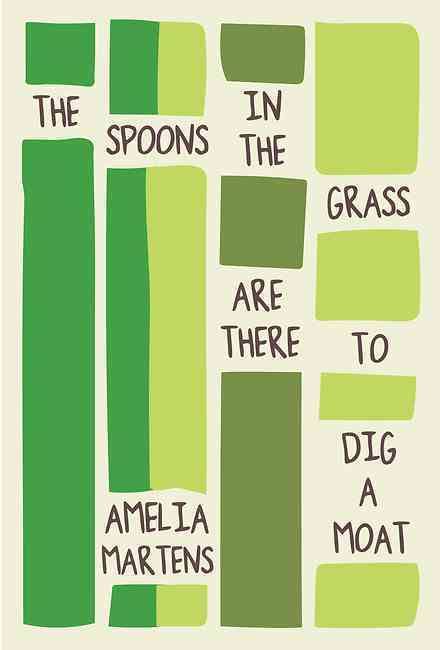 The Spoons in the Grass Are There to Dig a Moat is a collection of prose poetry by Amelia Martens. The summary on the inside of the cover describes the 54-page collection as an “encounter with a world at once familiar and strange,” which I interpreted to have a theme surrounding the before, during, or aftermath of a disaster, natural or man-made. This theme was portrayed through multiple narrative perspectives.

My overall interpretation of the collection can be viewed by the book’s title alone. It has a child-like nature to it, but the action of digging a moat vaguely alludes to the trenches used in warfare. I found that many of the poems, especially those that included a recurring daughter character, switched back and forth between an innocent, childlike perspective and a more blunt and realistic, adult perspective. This can be observed in the poem “Postcard from the End”:

“The war was beautiful when it started. Men hung from streetlights, their bodies pressed to poles to catch a glimpse of paper rockets. For each device: a hundred thousand dollar bills were dipped in glue and wrapped around a blue balloon. Pop-pop. Then steady hands readied rockets filled to the brim with gunpowder. A short fuse fit just through the pinhole, and women drank beer when they’d finish their shiftwork building similar bombs across the street. Children danced on broken glass of classroom windows. They sang songs about flowers and plagues.”

I found the daughter character, who I assume to be Martens’s daughter, very interesting, and found myself rereading the poems that surrounded her train of thought the most. I don’t see being stumped by a poem as a bad thing, because interpretation comes in actively seeking to understand it. In understanding some of these poems, I find that the childlike perspective in them is more present, which leads me to assume that the meaning lies within innocent references. “Bedtime” and “Pink Pigs and Orange Horses” showcases this excellently.

Jesus appeared as a character of sorts throughout the collection, and I enjoyed reading these particular poems—he’s portrayed doing very mundane things. My favorite poem of this type, “In God’s Country,” portrays this perfectly:

“The Messiah works the drive-thru. His fingers tap a touch screen to call up orders of fries, buckets of diet cola, and sides of cinnamon bites. Static voices fill his ears like an ocean. Each demand is translated as a typed command for the team standing over vats of oil boiling in the back.

By his first smoke break, even the hairnet hangs heavy. Out back at the dumpster, he thinks about how to help. How he might offer napkins, thin as onion skins, and sweep the path clear with his palms as he hands over a grease-stained bag.

His window only opens halfway. But it’s enough space for Jesus to look drivers in the eye. Enough time to tell them he knows, they know, we’re all heading uphill to die.”

I am biased in saying that this is my favorite poem because I’ve worked in a drive-thru before. But, I also think that it relates back to the heavenly power Jesus is viewed to have and how he attempts to use it to help us. However, the bleakness of the last sentence deviates from what I know Jesus’s character to be, which I think comes in part from the theme of disaster in this book, as well as the nonplussed attitude of drive-thru employees.

My observation of characters and narrators is heavily reliant on the form of these poems. All of the poems are written in prose style, meaning that they’re formatted to resemble paragraphs and sentences instead of stanzas and lines. As a fan of fiction, it’s almost instinctual to read them as such, but the syntactical difference between standard prose pieces and prose poetry signals the difference in literature. These sentences don’t follow the typical noun-verb rule we were all taught and often reads in a more rhythmic way compared to the average sentence in an essay or young adult fiction novel.

The description of events is almost narrative as well. There are a few poems that address memorable events, such as “Newtown,” which references the Sandy Hook shooting; “Heartwood,” with it’s allusions to the end of the Mayan Calendar (Dec. 26, 2012); “Marathon,” with its semi-obvious references to the Boston Marathon Bombing; and “The Robin Pulls a Thread” which references the clothing factory fire of 2012 in Bangladesh, India.

This collection of poems really makes you think, especially with the difference in perspectives and the recount of notable events. This may not be everyone’s cup of tea, especially if you’re reading poetry at night like me, but I do strongly recommend this book. It’s prose form really helps unfamiliar readers read poetry in a familiar way. In addition to that, I believe that it’s thought-provoking, yet completely enjoyable.

If you’re lucky, you may get a little stumped, but don’t worry too much about it. The Spoons in the Grass are There to Dig a Moat is available in our campus’s library and is also available for purchase online and digitally for under $20. Both options give you plenty of time to work through it.