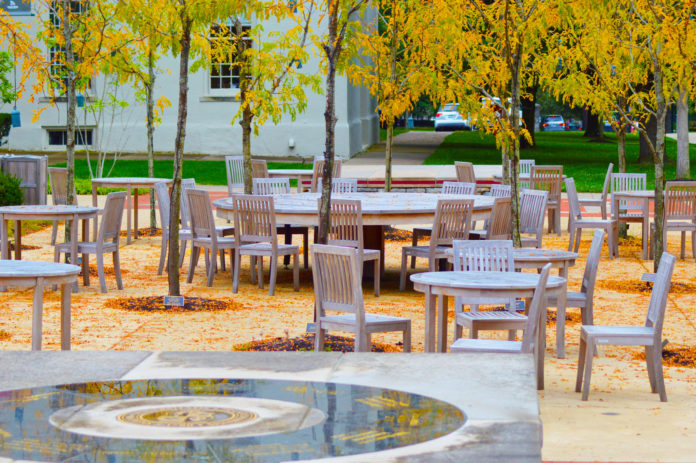 Regardless of whether we transferred here or started our college career at Transylvania, many of us have had experience with first-year orientations. Much of the focus of orientation is fostering a community among the incoming class before the academic year really kicks off.

However, as the year progresses, students dedicate less and less time to campus-wide community-building, and the focus shifts to smaller groups, such as student organizations and those who live in residence halls. Despite the fact that we are a small campus, we students tend to be self-segregated from one another. Because we are so involved within the subcommunities of campus, there isn’t much of an underlying community that includes everyone at Transy. We are so separated from each other by our friend groups and activities that there doesn’t seem to be any ‘Transy pride’ that can unite all of us students. Now that orientation is behind us, it’s time to challenge the obstacles to our ability to build a strong community. There are physical and social barriers alike that prevent us from reaching our full potential as a campus community.

Just as a community is defined by its people, community is also shaped – literally – by the physical space it occupies. The school’s latest residential additions, for example, lack a sense of a certain inviting, social feeling. The suite-style rooms offer the privacy of a hotel room at the expense of a shared living space. These buildings do contain common areas, but they are immediately sold as being study spaces, not social areas – the furniture in these spaces has to be rearranged in order to socialize in a more natural manner. They feel like places to go when you need a quiet place to get things done, rather than places to go to hang out with your fellow dorm-mates. But most of the time, as some of you may have noticed, these spaces are just empty – few people use these areas to study or socialize.

This is not just true of the newest buildings, however. Most existing spaces on campus seem to lean much more heavily toward being academic rather than social. Alumni Plaza is a beautiful outdoor space that can be one of the coolest places to hang out in. Most of the time, however, it has maybe three or four tables occupied, spaced out as far as possible from each other, with people looking for a place where they can do homework outside without being bothered by others. It’s almost unthinkable to go up to someone who you don’t know and sit down to try to talk with them. What if they’re working on homework and need to focus? What if they’re just trying to enjoy the weather and have some time alone? This kind of dilemma exists for most every space on campus – we don’t have any areas that are recognized as designated social spaces.

This seems to be a fundamental problem we face – socializing anywhere on campus requires already having your own friend group. Possible exceptions include the Campus Center and Front and Back Lobbies in Forrer, but even those are questionable at times. For example, several events that are not open to students take place in the Campus Center, like admissions events.  Even in the Caf, arguably the largest space on campus where many students go at once, it’s rare to sit with someone you don’t already know, unless it is the very beginning of your first year, and you are in the process of making new friends. We’ve all seen the same groups of people sitting in the exact same tables during both lunch and dinner, day in and day out. This is true of those who wear Greek letters and those who don’t. For those who do not have friends sitting at these tables already, joining them is out of the question. It seems like the greatest communities to which we belong are limited only to factions of the student population.

Because the student population is fragmented into cliques, there is only a vague idea of the Transy identity as a whole. Aside from the fact that we all attend Transylvania, what is it that unites us as students? Arguably, by choosing to be students at this school, we have all dedicated ourselves to a liberal arts education as defined by the university’s mission statement. How many of us would be able to tell what exactly that mission is without looking it up? What kind of values do we strive to uphold? And for someone looking in from the outside, how would they be able to tell?

In recent years, we have had a noticeable lack of indicators of those values on campus. The only places on campus that feature Transylvania’s seal is the staircase outside Haupt Humanities Building, which is currently covered up while the building undergoes renovations, and behind the information desk in the William T. Young Campus Center. Beyond that, there are very few – if any – prominent symbols of the university’s values around campus. A step in the right direction is the latest addition of the Unlearn Fear + Hate halos outside the library. Not only does it nod to the fact that the community project originated on Transy’s campus, but the project’s statement has resonated with much of the campus population. Campus could benefit from the addition of more meaningful artwork and symbols around campus. Such features are not just selling points for admissions, but they are visual reminders for everyone about the university’s mission.

Similar to the lack of symbolism, there is hardly any physical context for where exactly campus is located. What is the larger community we are a part of? Once again, looking around campus, you’re hard-pressed to find any answers to that question. The ‘Transy Bubble,’ as it has come to be called, is very real, and it’s thick. It doesn’t have to be as thick as it is right now – nor should it be. We’re not letting Lexington’s rich culture make much of an impact on campus. Having some representation of Lexington culture on campus could go a long way in solidifying our sense of being a part of the even greater Lexington community. There are plenty of examples of urban art throughout the city that could be integrated into campus. There are the stenciled quotations on the sidewalk of North Limestone; there are the banners outside Third Street Stuff that proclaim “unlearn fear and hate”; and there are also several murals on the sides of buildings downtown. Lexington has a rich culture of art that doesn’t have to be kept off campus.

The Transy Bubble has a tendency to contain its students to campus and the immediate surrounding area. There is the sense that students are discouraged from walking in local neighborhoods – specifically, the low-income communities in the surrounding area. There is a stark difference between the demographics at Transy and that of the immediate area. Truthfully, many of us come from wealthier, privileged backgrounds, and we are taught to stay away from anything different in that regard. Many are convinced that because these neighborhoods are areas of poverty, they must also have high crime rates. In actuality, these neighborhoods are not any more dangerous than any other part of town and are home to several local businesses and organizations. Using the Community Crime Map provided by the LexisNexis, one can see that various crimes are spread throughout town, with a particular concentration within the very heart of the city – quite a few blocks away from Transy. Granted, depending on the crime, there is another concentrated area to the east of Transy – but this area is also outside of the immediate surrounding area. The businesses and programs in these very places need local support. Students have the belief that these parts of town are ‘dangerous’ to visit. This impression doesn’t have to last. The notion that these areas and the people who live there are threatening because they do not have the same privileges of liberal arts students only divides us students from the Lexington community.

Division between the campus community and the city community is just one issue; there’s also the matter of division within the campus community. If we as students truly want to be responsible members of this community, it is up to us to create an inclusive community that all students belong to. This campus community we are building should encompass all organizations; we cannot allow our membership in organizations on campus to take precedent over this. We are students of Transylvania before we are Greek students, student athletes, newspaper writers, etc. Yet this all-encompassing community has been fragmented by a need to commit to a handful of organizations. While commitment to these organizations is not a problem in and of itself, when we start to identify with these groups before we identify as students, we limit our potential as a campus community. If a student falls out in one of the organizations to which they belong, reintegrating into a different group can be difficult if that person doesn’t have a connection to any of the other students on campus.

This doesn’t mean we must stop being so committed to our respective organizations and start being friends with literally everyone else and sing Kumbaya in back circle every night. Instead, we should try to foster a greater willingness to break down invisible barriers between organizations. The most blatant example of this divide is the tension between Greek-affiliated and unaffiliated students. Many students on campus have both unaffiliated and affiliated friends, regardless of whether or not they are a member of any of these organizations. However, there is still a divide between these two groups. For example, in past years, many unaffiliated students feel as though they are not welcome at philanthropy events hosted by Greek organizations, despite these events being open to everyone. Part of this issue is that Greek letters are plastered on every kind of advertisement for these events. Because these events are so heavily associated with Greek life, unaffiliated students can feel out of place at these events, particularly if they do not have any close Greek friends who invite them.

There doesn’t seem to be a bigger rallying point for students, something that can unite students campus-wide. What is it that keeps us at Transy and binds us as a student body? It has to do with the community and subcommunities we find ourselves in. This campus has a tendency to divide itself into smaller groups, which in and of itself is not a bad thing, but only when these smaller groups are not more important than the campus community as a whole. We do not need to limit our involvement in these groups, but if building a greater campus community is something we students want, it’s up to us to do it.

All this being said, where do we go from here? We could re-purpose existing open spaces for socializing. We could collaborate with local artists to bring more art onto campus. We could have more campus-wide events where no one is allowed to wear Greek letters but encouraged to wear Transylvania gear. The purpose of this essay is not to provide the student body with all the answers, but to start a campus-wide discussion about this issue and what should be done next. We would like to hear from others how they feel about the current state of our community. It is our hope that through this discussion, we will be taking the first steps toward building a campus community that will make all of us proud to be Transylvanians.