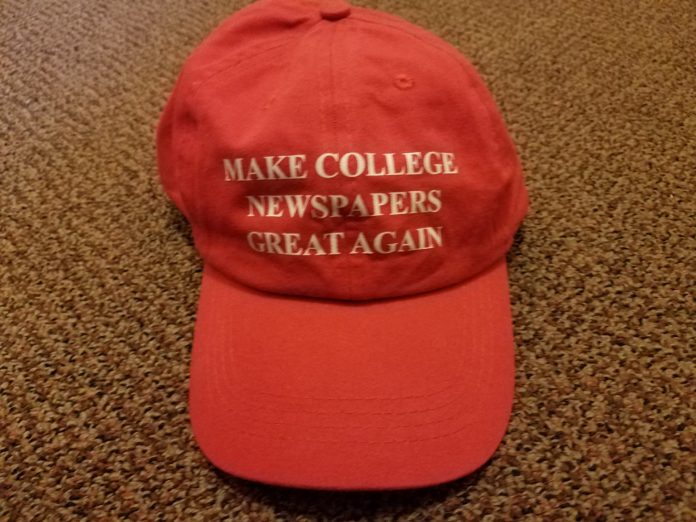 Above: Hats distributed at the Associated Collegiate Press conference by the ad tech company flytedesk.

Readers, we in the media failed you. The role of the news media, the entire storied and proud field of journalism, is to provide information to the public, so that they can make informed decisions about important issues. That did not happen this election cycle. The press failed. The press failed to impart the stakes of the election. The press could have stepped up to the plate and properly fulfilled its role as the fourth estate of civic society. Instead, the press reduced the candidates to soundbites, colored facts with editorialization, trivialized an historic election, and alienated an entire segment of the population from its audience: the segment that boosted Donald J. Trump to a victory in the presidential election.

Journalists were blind to a basic reality and missed the real story. Nearly across the board, Hillary Clinton was predicted to win by a landslide. Press rooms relied on high-tech polls, on data-driven analyses of voter demographics and public opinion, without getting on the ground to witness the heart of the situation. Until the final hours of the election returns – as North Carolina flipped red, followed by Ohio and Florida – a Trump presidency was believed to be nearly impossible. The lesson learned for the press here, in the words of Jim Rutenberg for The New York Times, is that numbers “can’t always capture the human condition that is the blood of American politics.” The press scratched the surface of the race, and as a consequence underestimated Trump’s support across the nation.

The media’s failure to accurately report the state of the election process was embarrassing. The polling data that the entire news media relied upon was flawed across the board. This fundamental flaw colored almost every assumption made by virtually every reporter, every analyst, and every pundit. As a result, the news media gave you a picture of the election, and of the country, that was simply wrong.

We fed American voters our own biases and assumptions and failed to take seriously the possibility of a Trump presidency. We remained so focused on crisis-generated ratings, viral quotes and insubstantial stories of the day that we failed to do our basic job. Throughout the election, the media portrayed ideas that made it seem as if the majority of the country was unified under Clinton. As a result of this misportrayal, election night came as a shock, and caused pain for many. This shock and pain has led many people to despair at the results. We could have avoided that shock and lightened the disunity among the nation by preparing the public for the possibility of both outcomes.

All day Wednesday we saw a numbing effect ripple through campus. Some classes and work shifts were cancelled. Professors shook their heads and sighed at one another in disbelief. Students exchanged bewildered glances. Roommates texted one another, “Love you.” The reaction even turned to vitriol by some reports: students being spat on, yelled at, receiving unsolicited messages and even being told they “deserved to be raped” for their beliefs. Students expressed everything from frustration, to glee, to hope on social media, talking about how their lives could be affected by the new political situation.

Readers, despite the shock Trump’s election has had on campus, we are proud of you. All day Tuesday we saw nothing but encouragement. “I Voted” stickers abounded and democratic spirit filled the air. We appreciated the good humor and expressions of love that carried the campus community through an important day. We have good reasons to hope that this encouraging atmosphere will carry on into the next four years. No matter where anyone’s political leanings lie, we are certain that throughout the next 100 days and beyond, the campus community will be brought closer together, not farther apart.