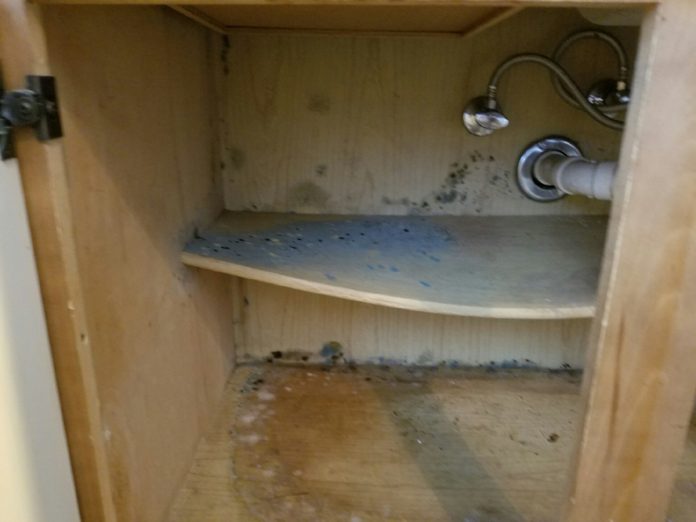 (Above: The mold caused by a leak found under junior Joseph Gearon’s sink in Rosenthal, which was quickly cleaned by Physical Plant.)

Mold problems are not uncommon in central Kentucky. Homes, businesses and universities deal with this issue, and Transylvania is no exception. Since school has begun, there have been multiple reports of mold entering students’ rooms in Rosenthal, Dalton-Voigt and Forrer residence halls.

As for Rosenthal, the situation is much more subjective to the individual room. There was a case this summer where a faucet had been leaking, and it caused a collection of mold under the kitchen sink. This could affect the health of those who live in the residence halls and will require the aid of a mold inspection service to clear up – see this service here.

As far as Dalton-Voigt goes, the problem occurred with the heating of the building. Dean Michael Covert said that the building’s temperature was not being controlled properly in the vacant rooms at the end of July. He referred to these as “operational problems,” due to not regulating the temperature that would have lowered the humidity.

“Multiple students were given dehumidifiers in their rooms, as well as Physical Plant looking at better temperature control. These were short-term solutions while we have been looking at more regulated measures for both Dalton-Voigt and the two new buildings for long-term solutions,” said Covert.

He stressed that if any isolated problems continue to occur, then students should contact Physical Plant. However, residence life has received scattered reports of incidents within Forrer, so Physical Plant has taken a deeper investigation. One first-year, Katherine Lewellen, moved off campus because the mold in her Forrer room was causing allergic reactions.

“After living in the dorm for a week it became extremely hard for me to breathe, especially at night,” Lewellen said in an email. “I would sometimes wake up at 2 a.m. in the morning unable to breathe and have to drive home to sleep…My symptoms persisted even after they cleaned my room.”

Lewellen was granted a room change after providing physician’s documentation of her mold allergy, but said, “unfortunately I was still not able to sleep there or spend any extended amount of time in the room.”

“After making an effort for two months to live in the dorm I made the decision to move back home,” she said.

Covert said that they inspected the roof and plumbing system for leaks, but found none. Naturally, checking the roof was one of the first things that was done. When buildings normally have mold problems, it’s usually caused by a leak in the roof. This is why it’s so important that roofing companies like Division Kangaroof (visit website here) are called out if people ever notice mold in their homes. It could be a sign that the roof needs some maintenance work. However, in this case, there seemed to be no roof problems at all. The roof was well maintained and didn’t seem to be the cause of the mold. When looking at the shower exhaust systems, they found two that needed to be replaced, as well as one that needed to be cleaned. Additionally, they found that about half of the dryer ducts within Forrer were not blowing air out of the building. This problem was fixed and a booster fan was applied in order to help ensure that the air leaves the building.

Transylvania Residence Life is addressing this potential problem and taking proactive measures to make sure that the building is safe. Covert said that student safety is their number one priority. One of these proactive steps was hiring Airsource to come in and take air samples of Forrer Hall during fall break. The results have not yet been received, but they are expected to come back to normal. However, if they come back problematic, then the university will take swift and ample measures to make sure the building is properly cleaned.

Additionally, a university official said that all reported incidents have been taken care of, and that “we just spot-checked over 100 rooms and didn’t find anything.” Overall, any mold problems that may have been created over the summer should now be taken care of and handled. If not, Residence Life urges students to contact them or someone from Physical Plant, so that they can take care of the problem. The Rambler will release another article on this issue when the AirSource results come back.