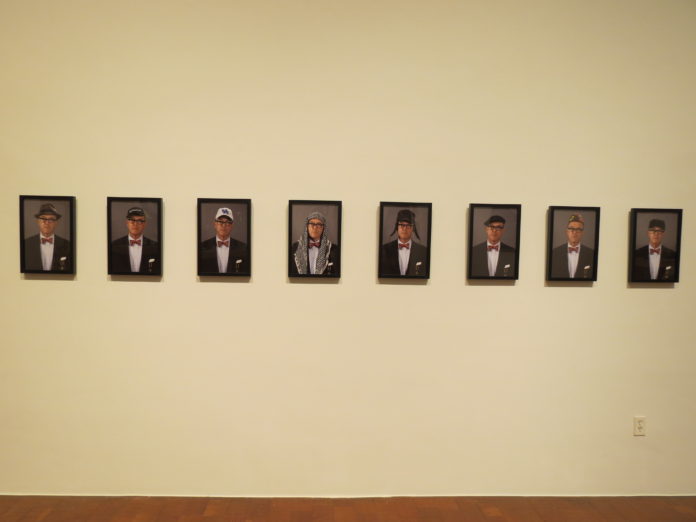 Until Nov. 27 of this fall, local artist Louis Zoellar Bickett’s exhibit “Saving Myself” will be on display at the UK Art Museum.

At first glance, the gallery looks like organized chaos. The contents of a pack rat’s house spread throughout a shiny white art gallery. But, upon closer inspection the items all start to make sense. Scattered across the walls are haikus written by Bickett, twenty-four framed photos of the artist in the same suit, but different hats, and a bus mirror engraved with the word “Faggot” so you can not look at yourself without seeing that word. 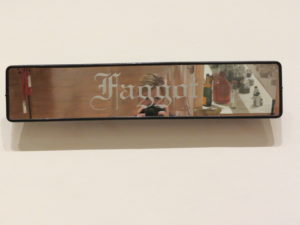 “Saving Myself” is a conglomerate work of different projects Bickett has presented throughout his career. Chronicalizing what it’s like to grow up gay in the south during the 50’s and 60’s at the forefront of the civil rights movement; picture frames are labeled with “faggot, n—–, cracker, and dyke” confronting the derogatory slang by labeling pictures of himself, his friends, and family with the terms. Lawn jockeys, which generally portray racial stereotypes, hold signs stating facts about the realities of the lynchings in the south. One reads, “Local authorities, if they did not actively assist in it, usually did nothing to stop a lynching.” 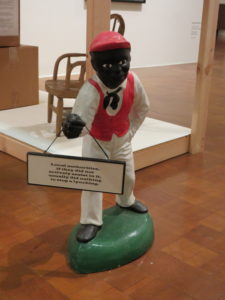 One corner of the gallery boasts a collection of ID’s, tags, hospital bracelets, and other momentos hanging from lanyards covering the two adjacent walls. Each item collected by the artist at a certain point in his life and memorialized in his exhibit. Another corner, is home to a cabinet full of glass jars filled with soil and water from places of importance to the artist: Central Park, Isle of Palms, South Carolina, The Mississippi River at New Orleans, LA, and Civil War Battlegrounds.

To the right of the cabinet are archives of collected obituaries filling black binders on shelves from Bickett’s “The Obituary Project.” To the left is a binder of post cards addressed to the artist from himself, collected from places visited and covered in phrases and rubber stamps. 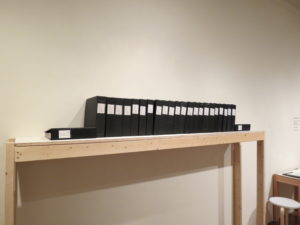 At the front of the exhibit is a a large glass case of random items from the artist’s life in a piece called “The Archive Louis Zoellar Bickett.” Cookie jars, baby shoes, Chinese takeout boxes, and jars of condoms are tagged with the dates these items were collected or received and how they were obtained. Each item saved by Bickett like a hoarder, but organized with meticulous detail. 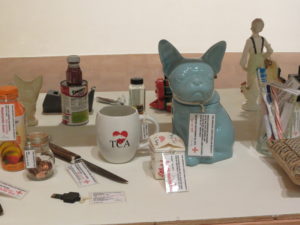 To the left of Bickett’s archive is a case of  seventy seven bibles. Some with bolts locking them shut and other’s with perfect circular holes in the middle of them. Throughout the exhibit are framed photographs of Bickett wearing a tweed suit and fedora holding different books, such as The Holy Bible and Grapes of Wrath. Each book holding a significance to the artist and his story to tell. 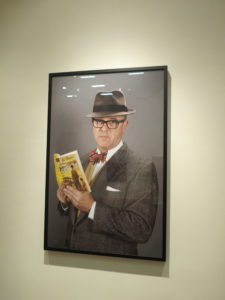