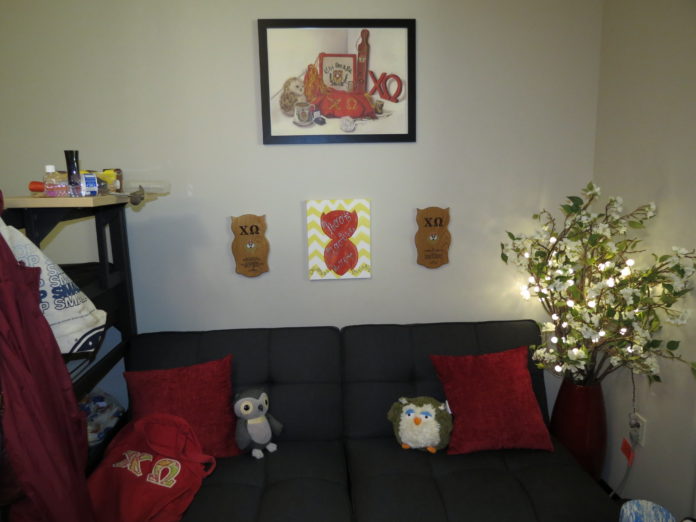 “Womanly always, discouraged never” is part of the symphony Chi Omega women live by through continuously working to lift each of their sisters up.

“It’s all about having a support system here, or anywhere else in the world that one of us might end up,” said Audri Wells about the sorority she ran to last fall on bid day.

Chi Omega is Transy’s largest Greek women organization with 66 active members. A group this large brings in a diverse mix of women, according to junior member Judy Brumley.

“We just have people involved in so many different things and a lot of our members are completely different from other members, but everyone just kind of meshes well,” said Brumley. 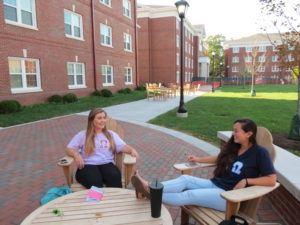 Reminiscing on her first time meeting with the women on hall night last fall, Wells said, “I just remember with Chi O a ton of laughter.” Little responded giggling, “Audri and I had a ton of fun on hall night.”

Returning to the hall one night, Brumley ran into two other members who asked if she wanted to do yoga.

“We like rolled out our mats on the Chi O hall and just did like 20 minutes of yoga,” she said.

“There were lots of weird noises,” junior Ryann Little recalled,  laughing. “If I want to do something, it could be anything, someone else is going to want to do it with me. You never have to do anything alone.”

In recent years, Chi Omega has placed a greater emphasis on scholarship.

“Work hard, play harder is what people saw Chi O’s as being, but now there’s such an emphasis on schoolwork and scholarship. Good things have happened,” said sophomore Anna Wilcoxson. 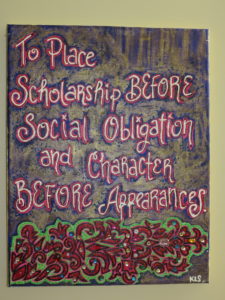 Brumley accredits their academic success on placing “a really big emphasis on working together and holding each other accountable.” This accountability led Chi O to have the highest GPA of Transy’s four sororities in the last year. The group even plans to have a book of the month club that Wells says they are “super hype” for. Later that night, a comment was made about how Brumley can read and review any book in just two days.

“It’s hard to put a label on the entire group,” said Brumley explaining how the diversity of the group makes stereotypes hard to pin down.

“We recognize that we’re all very different but our core beliefs brought us together and we make one cohesive, vibrant whole,” said Wells.

These core beliefs hold the value of being “womanly always.”

“As long as we, as a whole, promote our individual best selves we’re really living by the idea of ‘womanly always, discouraged never,'” Wells said.