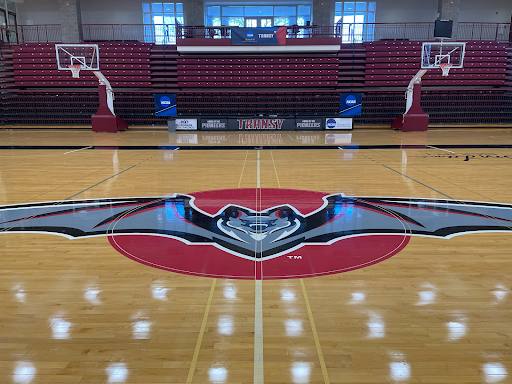 On Saturday the 5th, the Transylvania Pioneers women’s basketball team defeated the Southern Virginia University Knights 77-55, advancing to the Sweet Sixteen of the NCAA tournament, matching the best tournament performance in school history. The Pioneers also retain an undefeated record for the season, improving to 26-0.

The first two rounds of the NCAA tournament were hosted in the Beck Center on March 4th and 5th. In the first round, the Pioneers faced the Washington and Jefferson University Presidents. The first half of the game saw the two teams both going on runs, but ultimately the Pioneers led 42-27 at halftime. While the Presidents were able to go on a run to start the third quarter, the Pioneers were able to make adjustments on defense and hold Washington and Jefferson to only 33% shooting from the floor for the rest of the game. The Pioneers ultimately won 69-52, with Madison Kellione leading the team in scoring with 20 points and Dasia Thornton achieving a double-double with 17 points and 13 rebounds.

The Pioneers faced the Southern Virginia University Knights in the second round. Both teams traded blows through the first quarter, but the Pioneers began to pull away in the second, shooting over 50% from the field and going into the locker room up 38-24. The Pioneers put the game out of reach in the third quarter, at one point going on a 14-2 run and being up 29 points. At that point, all the Pioneers needed to do was manage the clock to eventually secure a 77-55 victory. Kennedi Stacy and Laken Ball lead the team in points, scoring 24 and 23 respectively.

With this win, the Pioneers advance to the Sweet Sixteen of the NCAA tournament, matching the best tournament performance in school history, which was another Sweet Sixteen run in 2019. They also preserve a perfect record for the season, improving to 26-0.

Transylvania University is hosting the sectional semifinals and finals of the tournament on Friday, March 11th and Saturday, March 12th. The Pioneers face off against the University of Mary Hardin-Baylor Crusaders in the semifinal on Friday at 6:30 P.M. in the Beck Center. The winner of that game would then face either the Springfield College Pride or the Trine University Thunder in the sectional final on Saturday at 6:00 P.M. in the Beck Center. Winner of the finals would have the opportunity to go to Pittsburgh and compete in the Final Four of the tournament.