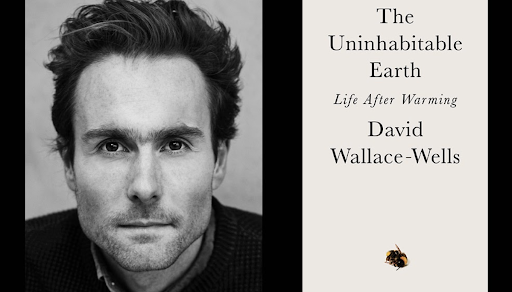 On Wednesday, February 16th, David Wallace-Wells came to Transylvania University’s Carrick Theater to talk about his book “The Uninhabitable Earth Life After Warming”

Who is David Wallace-Wells?

David Wallace-Wells is a 39-year-old American climate journalist who was born and raised in New York City and is best known for his book The Uninhabitable Earth Life After Warming.

At the beginning of his talk, he provided a disclaimer to the audience about his qualifications saying: while he is NOT an environmentalist, he has had many personal experiences with climate change that has changed his perspective on the topic.

“I spent my life complacent from global warming and that it was happening very far from me” he explained, but has “spent the last couple years in a dizzy awakening”

What did he have to say?

Before David Wallace-Wells began, there was a speech from 21-year-old Liam who was a student of Dr. Brian Rich in First Year Seminar where they were able to read The Uninhabitable Earth Life After Warming. When Liam began to speak, it was abundantly clear that he was Australian. While in Dr. Rich’s class, his home of Australia, was suffering from wildfires and bushfires that killed approximately a billion animals and destroyed countless homes. These horrible conditions are directly related to the exploitation of fossil fuels.

When Wallace-Wells first came on stage, he began his talk by presenting the good news: he does not think that the Earth will actually become inhabitable for humankind on a timeline of decades or centuries that we as a current society will be a part of. Wallace-Wells’ talk soon became very sobering and the room began to have a thick layer of tension. He said that even if we as a society avoid the worst-case scenarios, that isn’t winning. We have already lost but the real question is: how much will we lose?

He then says that we instead have to think about the REAL questions: How do we define habitability in the decades to come? What impacts will we endure? What will the burdens be for future generations? He begins to answer these questions by providing his three aspects that impact what the future will look like: The speed of change and momentum of effects of climate change, the speed of human response, and the speed of disorientation

Speed of change and momentum of effects of climate change:

Our current definition of climate change began during the Industrial Revolution and half of the emissions of burning fossil fuels have come from the last 30 years. Today, the planet is 1.2 or 1.3 degrees warmer than the start of the Industrial Revolution. This is not the work of many generations, just one: ours. We are just now finally beginning to see climate change, and we will write the story of the climate’s future whether we like it or not.

If things keep going the way that they have been, large portions of the world with high populations will be hit hard and will lose half or more of economic growth. Just to name a few, croplands can be less productive at the end of the century, high levels of warming can double war, violence, and assaults, infectious diseases can worsen, wildfires fanned.

Impacts only tell half the story, and human response will be the other. As awful as this future looks, those impacts are a reflection of our power over the climate. Society is still engaged in denial, but there has been a global political awakening. The age of climate denial is beginning to decline due to climate speakers who feel an obligation to show support for climate action. Choices can be made now and in the future to combat climate change and we can make different sets of choices, but change is disruptive and oftentimes a foreign concept.

Wallace-Wells thought the future would be more prosperous, but he doesn’t believe that anymore after seeing how the world has changed for the worse. Climate change can be overcome on a physical scale, but it’s not something that a lot of people care about. Also, prediction models of change are no longer something we can rely on, as “It’s a mistake to take to the bank these predictions”.

The Amazon rainforest has stopped absorbing carbon dioxide and has switched from a carbon sink to a carbon source and air pollution from fossil fuels kills 10 million people per year. Nature is a conceptual category. In the past few decades, nature has come to play a role in society: it shows our humility and our future and reminds us of what’s truly important.

During his speech, audience members were encouraged to text their questions for Wallace-Wells to answer. This is what they had to say:*

Well, this is a smaller problem than it used to be because the evidence is stronger for climate change and people are more concerned about climate than they were in the past. The big problem is complacency.

This is not a question someone would have asked 5 years ago which is progress within itself. But, these corporations can’t get away with empty climate rhetoric forever. We have to be realistic. Are the pledges that are being made even possible?

I am conflicted about it. I feel it is a bad idea to close nuclear plants running safely before we have the means to replace them safely. Plus, nuclear power is much more expensive than fossil fuels and it’s better to invest in renewables and not nuclear. That being said, people die every day from fossil fuels more than anyone has died from nuclear plant meltdowns.

How did Students Respond?

After attending the event, I asked some students who were in attendance how they felt about David Wallace-Wells and his speech. Some chose to stay anonymous.

Josie Grant: “ Wallace-Wells brought up both emotional and logistical arguments to persuade the student body and other people in the audience to have an open and honest conversation about the effects of climate control and what we can do in our daily lives to make a difference”

Anonymous Student: “I loved what Wallace-Wells had to say! I’ve always been fascinated with climate change and it’s crazy to see how bad things really are.”

Anonymous Student: “His speech was so interesting in my opinion. The things he said were so raw and real. It was very eye-opening listening to him speak. He said things that I never would have thought about and problems I didn’t even know existed. I think I may buy a copy of his book!”