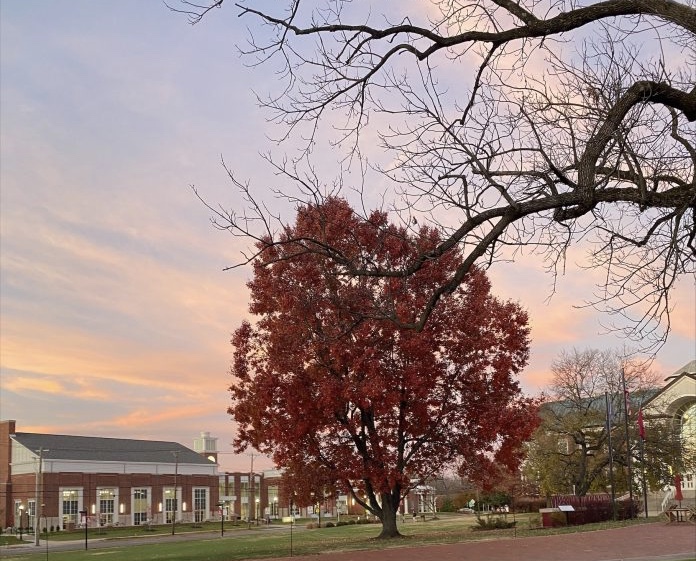 Meeting Allison Spivey at Gratz Perk for coffee during the chaos that is finals week, what seemed to be most on her mind was the fate of printed journalism. Perhaps this was because as Editor-in-Chief she’s overseeing a printed version of The Rambler, Transylvania University’s student-run newspaper; and for context, The Rambler went entirely online in 2017. This switch is obviously not just a Transy thing: the internet has been compared to the Printing Press in regard to how it has revolutionized human life. When was the last time you picked up a newspaper and read an article or two from it? If you can answer that question, you’re better than me. Podcasts, online magazines, YouTube, Tik Tok; our senses are bombarded with an endless stream of stimulation. On top of that, we use technology from morning till night. An iPhone (our “pocket-sized God”, as Spivey calls them) even directly contributed to the writing of this article.  Because I was worried about forgetting something important after the interview was over, I recorded the whole thing using the Voice Recorder app. Before the iPhone I would’ve had to use a tape recorder, and before that I would’ve had to learn to take notes fast or in shorthand. Oh, how times have changed!

If you ask Spivey, the change is not necessarily for the better. “This is just me being a baby,” she tells me, “But I don’t want to look at my phone for too long. It hurts my head. It hurts my eyes. It makes me feel like I’m missing something looking that far down…I like the written word. There’s something final about it. There’s something honest about it. You can’t go back and be like ‘oh, I missed a comma, let me fix it’. I mean, who cares?” Over the course of our conversation, what could not fail to strike you is how much The Rambler means to Spivey. To say The Rambler is important to her would be an understatement. She’s not doing this as a favor to Transy or just to pad her resume. She has found a real passion, and her mission is to spread that passion. “I want to go around and ask ten people I see and eight of them to be like ‘oh yeah, The Rambler.’ I don’t care about the other two. That’s fine. But I just want the majority of students on campus to at least know that we have a paper.” The concern is not unwarranted since the paper currently lacks a certain presence on campus that you would think a student-run newspaper would have at a school with roughly a thousand students. How did we get here and how did Spivey become the person keeping the paper alive?

When Spivey came to Transy in the fall of 2018 she, like freshmen from time immemorial, wanted campus involvement. But not “hav[ing] the money or the means” to join Greek Life and not being “musically inclined or athletic in any way”, writing for The Rambler seemed like the best option and a creative outlet that her high school had lacked. Back then contributors got paid to write their stories and the advisor was a “big New York Times style guy” with strict journalistic standards (Spivey hesitates to use the word “tyranny”). The paper had an important presence on campus, and students kept up to date with it.

“It felt very prestigious when I started,” Spivey recalled, “and it got to my head.” In her sophomore year, she rose in the ranks to News Editor, which at the time was the first step in the common trajectory for someone wanting to become Editor-in-Chief. “It used to be you got to be an editor sophomore year…a copy editor junior year and then you’d be Editor-in-Chief senior year, so I was on the right track.” She was one of the few freshmen to join and stay with the paper that year, so it made sense to think that she might be at the helm one day. But her trajectory would deviate from the norm for as John Lennon says, ‘Life is what happens when you’re making other plans.’ In January and February 2020, a new virus, COVID-19, began to spread, and by March 2020 the World Health Organization declared a global pandemic. As the death toll rose schools closed, businesses shut down, and our lives were driven to a halt. It was one of those moments after which your life is never quite the same afterward.

Most universities opened up again by the fall of 2020, but it was anything but a normal year. In the hopes of minimizing complications if everything shut down again, Transy’s administration decided to switch out the semester system with the module system. Instead of four classes for around three months, there were two seven-week periods in which the students took two classes. For this reason, the editor at the time, Abby Stone, decided that the paper should take a hiatus. This was not an uncontroversial decision, and to this day Spivey wonders if The Rambler would have kept its readership if the work had continued. But the module system was hard on students and professors alike–it even sparked an organized student protest–so it seemed like the best decision at the time. As the world returned to semi-normalcy by the Fall of 2021 Spivey brought The Rambler back to life. So after a very unexpected detour, Spivey’s trajectory with The Rambler got back on track.

Now a senior in the class of ‘22 double majoring in Education and Social change and Psychology, Spivey is aiming to usher in a “Rambler Renaissance” and turn The Rambler into a “dorm-hold” name again. Spivey, like a lot of us post-pandemic, is operating on a gnawing sense of lost time. “I don’t know if this is true, but I always felt like the senior class and all the classes affected by Covid–including yours, including everybody else’s–just don’t have that same sense of small campus community that Transy always advertised. And I don’t know if that’s just because they have false advertising and you’re always gonna have your little cliques, or if it’s because we’ve spent years stunted by a pandemic. But for whatever reason, I think it’s important to share student experience, especially in the student-run media.”

Scanning through the archive on the website, the student experience definitely shines through. The various voices and the breadth of subject matters covered in the paper are impressive: everything from baseball superstitions to the importance of mathematics education to theatre, gallery, and food reviews. As well as campus, local, and international news. The Rambler website has articles dating back to August 2016, although you can find older issues on the Kentucky Digital library website or in the special collections section of the university’s library.

Ask Spivey if she’s aiming for a career in journalism, and she seems unsure. “That’s a good question.” She says. “…out of all of my classes all I want to do is work on The Rambler stuff. Whether it’s the layout of the physical copy or writing pieces about student opinions or whatever. I have found a love for journalism, and I would definitely look into a career along those lines. I’ve looked at some grad programs at different schools and they’re all really fascinating except they tend to require a journalism major in undergrad. I just wish I wasn’t living in a time where everything is Buzzfeed…[But] Print’s not dead, and I hate that people think it could be…” Spivey’s voice trails off. But the passion quickly resurfaces. “Yeah, okay, I’m gonna be a journalist. I am.”

For now, at least being Editor-in-Chief at The Rambler will suffice, and Spivey is already bubbling with ideas. “My main focus next semester [will be] an app. We need a way for someone to just click on it and [have it] pop up. They need to get notifications that a story was posted.”

“Using technology to help rather than hurt!” I replied. It’s a clever idea. Build up a digital readership, and then maybe a printed version would be more viable. But as always, the question of money comes up. The paper would need more members. Someone for layout, someone for copyediting, someone for stocking the paper all across campus, and not to mention the expenses. And the Rambler would need more stories to fill a physical copy each week. The goal just seems to get more and more complex the longer you think about it.

Having said that, The Rambler may not be what it was, but things are looking up. “You know, not to toot my own horn but the Rambler began this year as just myself,” Spivey explains with (in my opinion) undo modesty. “And now we have almost fifteen writers which is awesome. And if we could end next semester with twenty and go into next year with twenty and then by the end of that year have twenty-five. And then we could have stories posted at least three times a week!” This is what she wants to leave behind after graduation. Only time will tell. But regardless, on behalf of all the staff at The Rambler and on behalf of all people who would rather read a book bought from a second-hand bookstore than on a Kindle I want to say to Allison Spivey thank you.