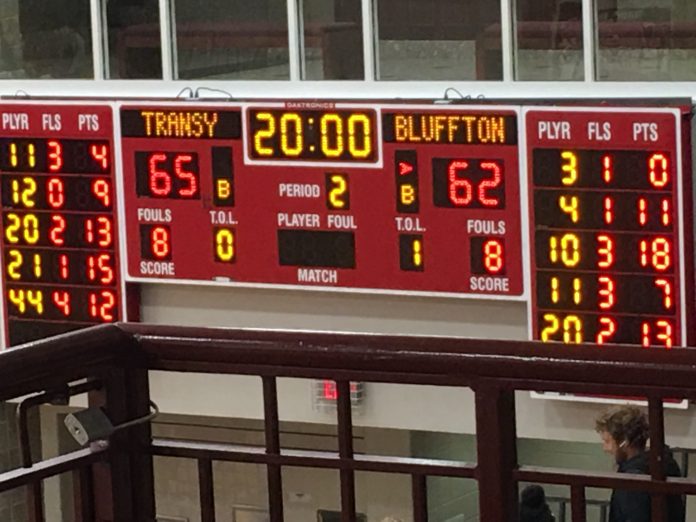 On the first night of December, Transylvania men’s basketball hosted the Bluffton Beavers in the initial HCAC (Heartland Collegiate Athletic Conference) game of the season. Bluffton had come off of four consecutive wins, sporting a 4-1 record. Meanwhile, Transylvania presented a record of 2-3 looking to continue a positive trend after capturing a win against Frostburg St.

The Beck Center witnessed an enthusiastic crowd from the tipoff, but the story of the first half was the accuracy of three point shooting for Bluffton. The Beavers launched 12 from deep range and connected on 6 leading to a high scoring 36 points at the half. Guard Andrew Renner scored 9 points in the first half, all courtesy of the three point line. While coach Brian Lane did use some different defenses, including a full court press and 3-2 zone, it was clear the defense would have to focus on slowing down the shooting of Bluffton.

Transylvania weathered the storm and managed to put 34 points on the board themselves by the half. Instead of relying on three point shooting, the Pioneers focused on getting quality possessions and working the ball into the paint. Center Luke Schroeder showed solid composure and connected on a plethora of hook shots and a mid-range jumper. Devin Twenty also took a big share of the scoring burden, scoring 11 points on an efficient (4-5) shooting, as well as netting Transylvania’s only three pointer of the first half.

The inability for either team to build any sort of comfortable lead remained throughout the second half. Specifically, the contest can be told as a tale of two runs. At the 7:20 mark in the second half, Bluffton’s Jameel Cosby made a layup to give the Beavers a 1 point lead, beginning an 11-3 run in favor of Bluffton to give the visitors a 7 point lead with just 4:35 left in the contest. From there Transylvania went on on an 8-2 run in which Cooper Theobald either scored or assisted on all baskets, to give the Pioneers a 1 point deficit (62-61) with 2:13 left to play.

After a stalemate the pioneers called timeout with 48 seconds remaining, down 1, and decided to draw up a play for first year center Luke Schroeder. The 6 foot 8 youngster hailing from Sydney, Australia managed to convert a drop step move on the left block with 15 seconds remaining in what proved to be the game winner for the Pios. After two consecutive turnovers by Bluffton and a pair of free throws from Will Sivillis the fans were left with a Pioneer victory (65-62) and only nubs on the top of their fingers.

Interestingly, both teams had nearly identical numbers in all statistical categories but one, turnovers. The Pioneers lost possession just 7 times compared to Bluffton’s 14. More specifically, in the second half, the Beavers turned the ball over 6 more times than Pioneers, along with producing 5 turnovers in the last 3:33 of the game. While Coach Lane had experimented with zone in the first half, in the second it was simply just man to man pressure defense that allowed Transylvania to eek out this one in the second half.

Moving forward, it will be intriguing to see if Coach Lane has locked in a rotation. In these initial 4 games starters and playing time have jumbled around quite a bit however the starters tonight were the same as the previous game. Going forward it seems Luke Schroeder is playing a bigger scoring role and clearly faith was shown in him tonight, giving him the nod to take the game winner. The persistent trend of balanced scoring seems to be for the staying as 9 players put points on the board with three pioneers in double digits. Overall, it seems the Pioneers have recovered from their 3 game losing streak in November and are representing a (3-3) record with a (1-0) start to conference play.

The Transylvania men’s basketball team will next play at Hanover on Wednesday, December 5 at 7:30pm. You can view the games live here. 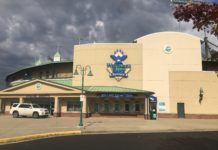