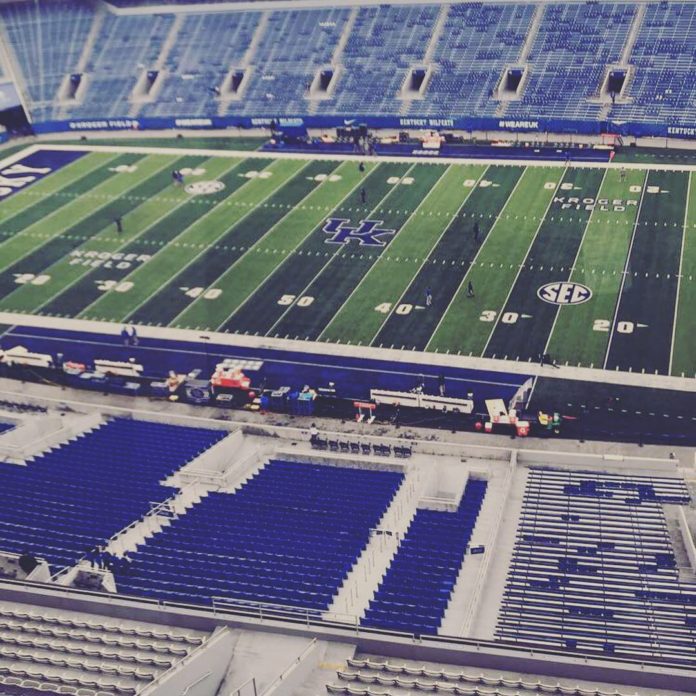 The hometown Kentucky Wildcats kicked off their senior day on windy Saturday afternoon against the Middle Tennessee Blue Raiders. After a hot start to the season, the Wildcats have cooled off suffering back-to-back losses at the hands of SEC foes, Georgia and Tennessee. The Kentucky team looked to make their fans and seniors proud against the Blue Raiders.

The Wildcat seniors stepped up in a big way for the Wildcats in their game this past weekend. On defense, Seniors safety Mike Edwards and outside linebacker Josh Allen were all over the field combining for 28 tackles, two sacks, a forced fumble, and an interception. Edwards started the game with a 66 yard interception return for a touchdown. He followed that with forcing a fumble on the next drive to give the Wildcats some early momentum.

Josh Allen had two sacks in the fourth quarter to notch two Kentucky records which were most career sacks and most sacks in a single season. His season total is up to 13 and his impact defensively is a huge key to the team’s success this season.

Offensively, the Wildcats continued their success running the ball with Junior running back Benny Snell rushing for 116 yards with a pair of touchdowns. His physical play broke down the Middle Tennessee defense consistently breaking tackles and looking like a dominant force on the field. The crowd grew consistently more excited every time he touched the ball.

Senior tight end CJ Conrad also found success against the Blue Raiders by catching a touchdown off a highlight reel throw on the run from sophomore quarterback Terry Wilson. UK secured the victory 34-23 improving their record to 9-3 which is the best record at the 11-game mark this program has had since 1984.

Next week the Wildcats are looking to conclude their regular season with a win against the Louisville Cardinals, who have struggled mightily this season. Saturday, they fell to the North Carolina State Wolfpack at home 52-10. They are currently on an 8-game losing streak going into this game, vastly underperforming to their expectations going into the season.

The loss of their Heisman winning quarterback Lamar Jackson has really affected the Cardinals’ play this year. Going into Saturday, they fired their long tenured head coach Bobby Petrino due to their poor performance. They have not won a single conference game this year, after looking very competitive in their conference the past three seasons with Jackson leading the charge.

However, this rivalry is known for being a very even series. Last year, the Cardinals stomped the Wildcats 44-17 at Kroger Field. The year prior to last, Kentucky won a highly contested game in Louisville upsetting the Cardinals in front of their home crowd. The Cardinals do have two weapons at the wide receiver position in senior Jaylen Smith and redshirt sophomore Dez Fitzpatrick that are looking to breakout in their season finale.

Two teams that have had completely opposite seasons look to finish strong by beating their in-state rivals. Kentucky gets to look forward to a bowl game following this season, while Louisville’s season will end Saturday regardless of the result. This game will be aired on ESPN2 at 7:00 this Saturday and should be an entertaining game to watch for fans of either Louisville or Kentucky.