The students who held up signs and passed out lists of demands in the Alumni Plaza demonstration held on May 8 were quick to clarify that they were not “protestors,” though in organizer and senior Kacy Hines’s words, they wanted “to see some real change.”

“We want to work alongside the administration… the event is to garner support for teaching people about what is already happening on this campus,” said Blake Taylor, a senior and one of the event’s organizers, the day before the event.

“The fact is that probably 85% of campus is cis, white, straight, and privileged, and if you’re not fighting alongside the people who are struggling, you’re complicit against that struggle. There are people graduating who have never had to educate themselves on privilege, things of that nature.”

The demonstration was framed around the “Change My Mind” meme, which places the burden of disproof on an idea’s viewer rather than a burden of proof on its presenter.

Demonstrators sat at tables placed on the lawn behind Old Morrison and asked those who approached the tables to sign petitions to the administration if they did not disagree with any of the demonstrators’ demands. We obtained a list of these demands in full, and they can be viewed below: 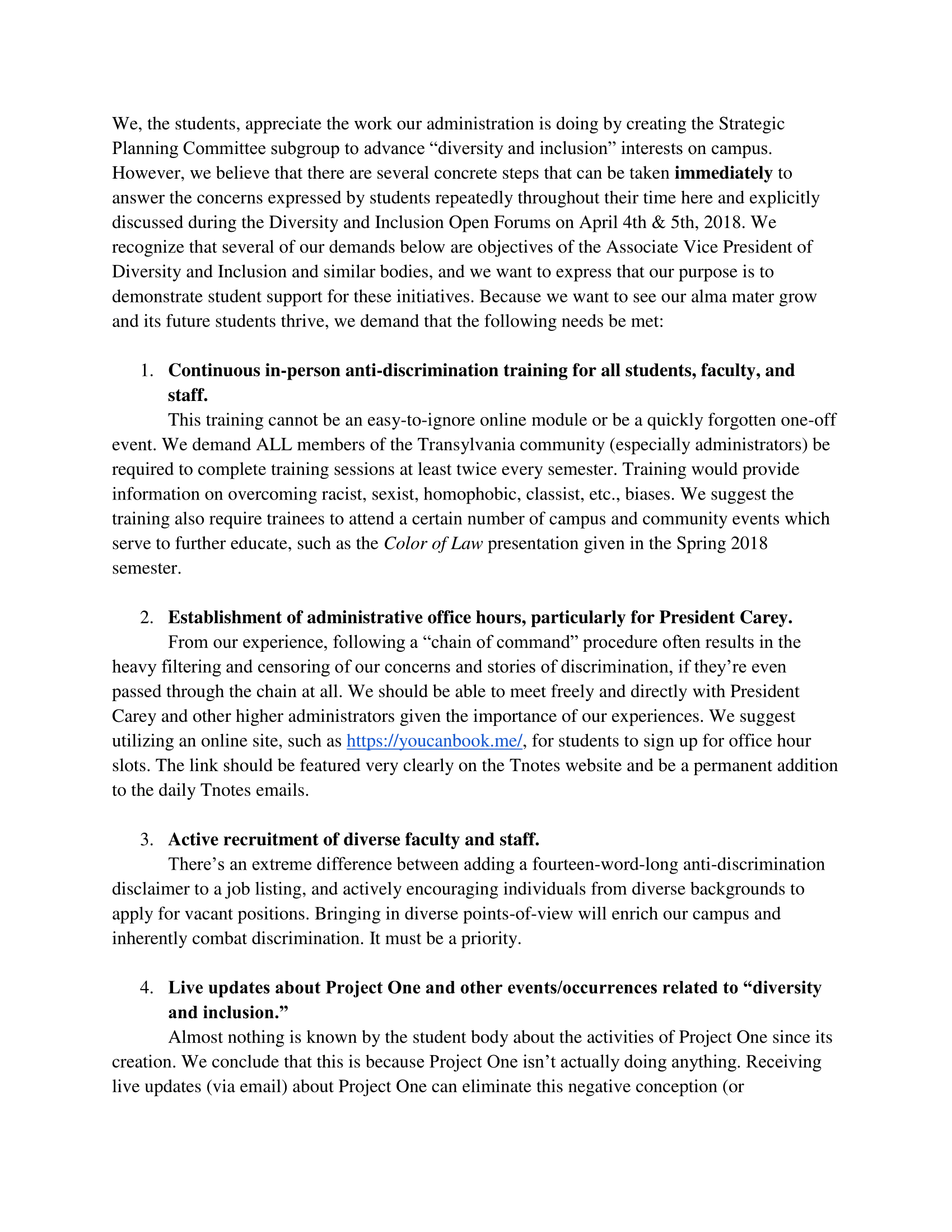 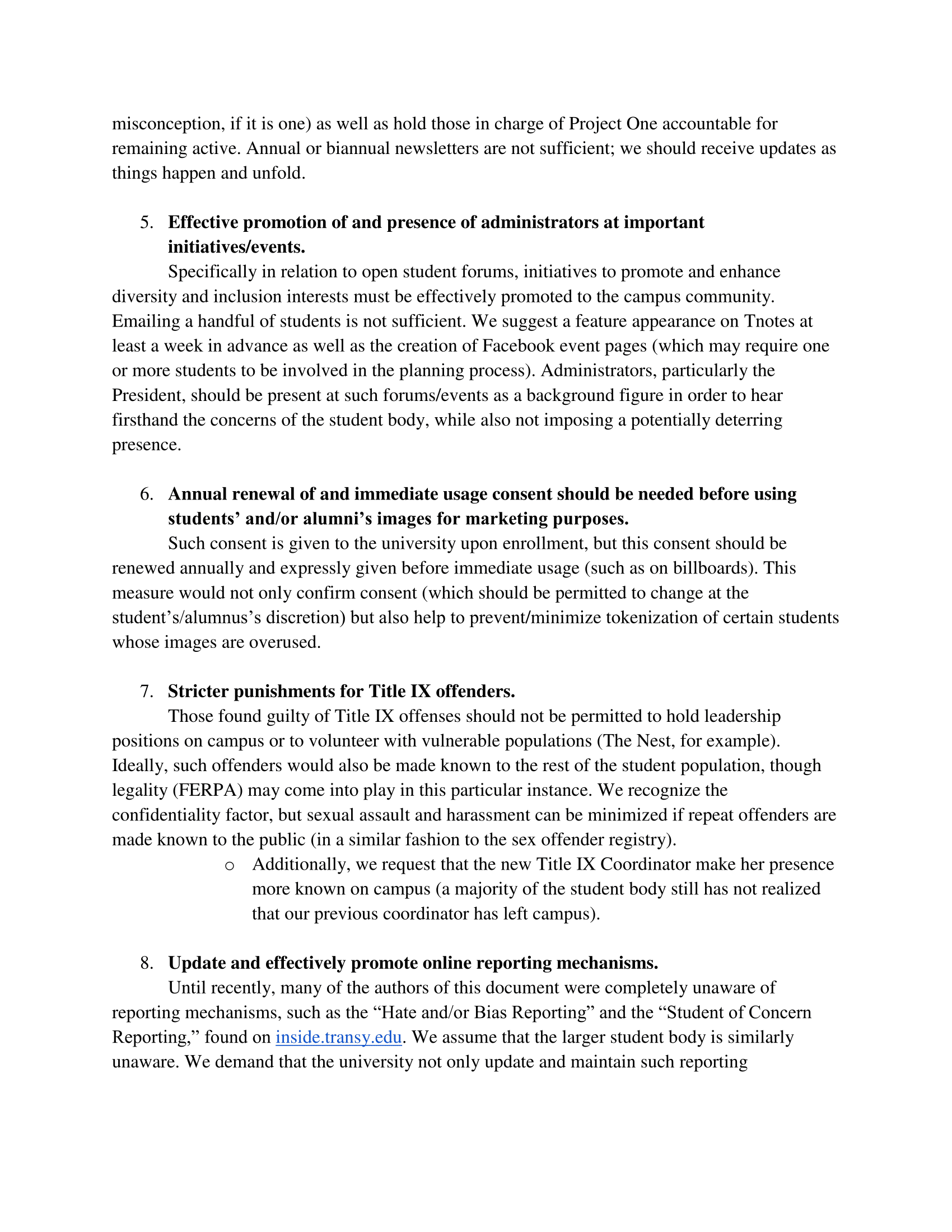 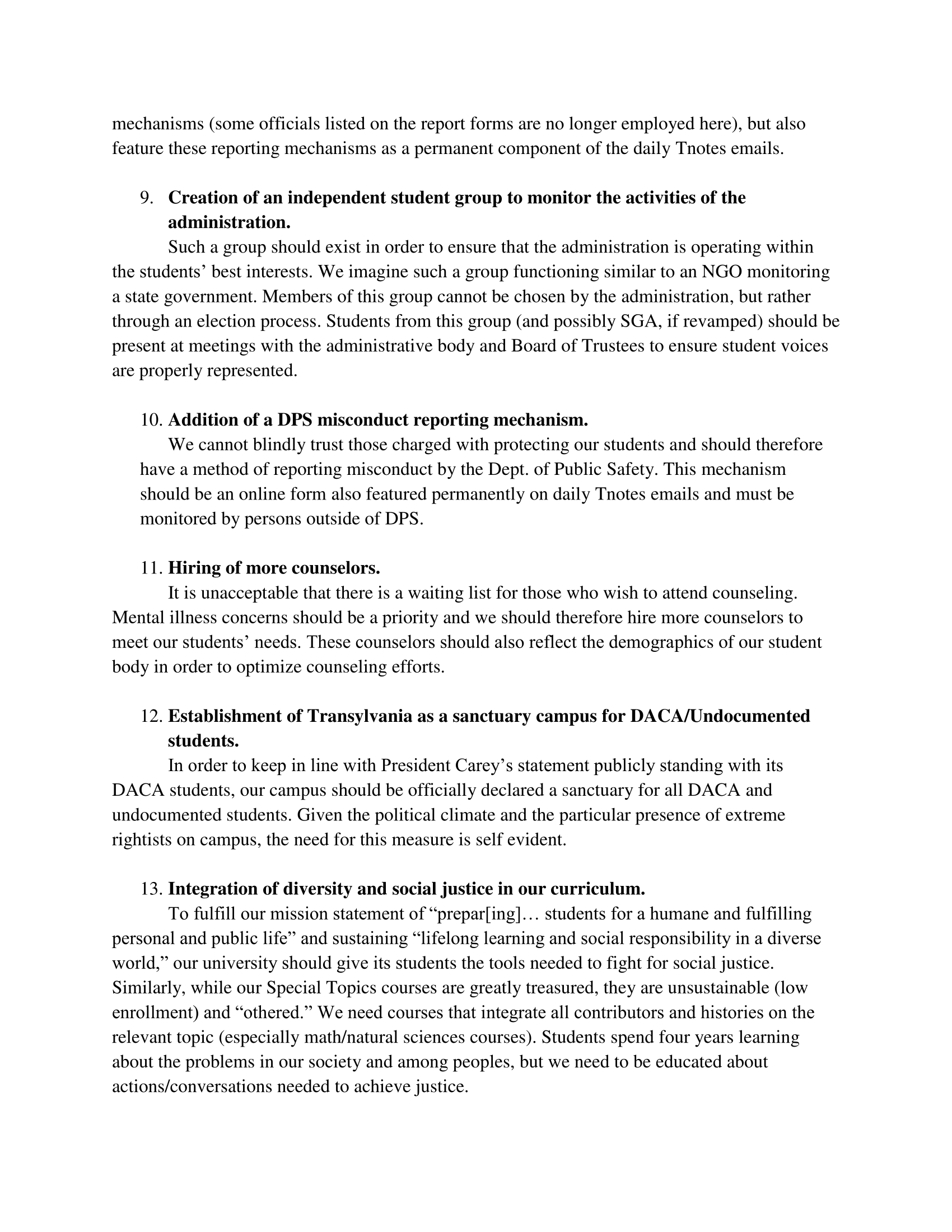 Taran McZee, the new Associate Vice President for Diversity & Inclusion, had learned of the event in advance and requested a meeting with the demonstrators to discuss their concerns. Also in attendance were Vice President of Enrollment and Student Life Holly Sheilley and Vice President for Marketing and Communications Michele Sparks. These administrators did not attempt to dissuade organizers from holding their event, but said they sought foremost to listen to their concerns.

Administrators repeatedly sought assurance that students wanted to cooperate and work with them to solve problems, while two students who wished to remain anonymous informed The Rambler prior to the demonstration that they wanted to sign the petition, but worried that doing so risked retaliation from the administration or from professors, potentially including loss of their scholarships.

Asked for comment on this, President Seamus Carey wrote, “Freedom of speech should be a cornerstone of any academic campus… No student should be fearing retaliation from anyone on this campus.”

President Carey, Dean Bryan, and McZee all attended the demonstration in Alumni Plaza. (Dr. Sheilley was out of town but stated she otherwise would have come.) According to several demonstrators, President Carey stayed for “about an hour” to discuss the students’ concerns and ways of potentially addressing them.

Asked how he would describe the tone and substance of those conversations, President Carey wrote, “Honest. Open. Real. Authentic. I saw real courage from these students in how and what they expressed to me and the other cabinet members present.”

McZee made similarly positive remarks. “The students did a great job explaining the ‘why’ for the demonstration and their eagerness for social justice on the campus was admirable,” he wrote.

The day of the demonstration, each declined to answer specifically questions about which of the demands could be accommodated and which could not. But the following week, on May 17, organizer and senior student Kacy Hines solicited a second meeting, this time between the Cabinet and the demonstration’s organizers to discuss ways the University might address the demonstrators’ demands. The Rambler attended that meeting.

The discussion was framed around the list of demands, point by point, as Cabinet members sought to identify and clarify actions already being taken or, where opportunities existed, to commit to take action. The discussion ran to about ninety minutes.

Of the many things discussed and debated, one that generated the most conversation was demand #1: “Continuous in-person anti-discrimination training for all students, faculty, and staff.”

Blake Taylor asked what it would take to get more speakers to come to campus who would address issues of prejudice and discrimination, to help students address these issues. Sparks replied that the faculty have chosen “Civility” as next year’s theme, and Bryan advised that the faculty will largely be responsible for choosing speakers in accordance with it.

Senior Paola Garcia asked whether “Civility” is “real civility, with mutual respect or just civility as a concept… that’s used to silence people,” and Dean Bryan answered that the theme was understood as being connected to issues of privilege.

Following demand #2, the President agreed to establish an open hour for students to visit his office. He will be available every Monday he’s in town, from 8-9 A.M., though the start date of these office hours has not been publicly announced.

Responding to students’ request for “active recruitment of diverse faculty and staff,” McZee said he had already modified the language of Transy’s job postings to make them more explicitly solicitous of diverse candidates. A requisition for an “Assistant Director of Diversity and Student Engagement,” posted on May 22, contained the following statement: “Transylvania University is an Equal Opportunity Employer and is committed to enhancing the diversity of the university community. In support of this goal, we seek qualified candidates with a wide range of backgrounds, perspectives, and experiences. We embrace diversity and encourage all who are interested to apply.”

Sparks added that Dean Bryan requires that pools of possible candidates for any open position be representative of many diverse groups.

Demand #4 called for “Live updates about Project One and other events/occurrences related to ‘diversity and inclusion.’” McZee said that Project One is “a staple on this campus” and will not be rebranded under his tenure. Kacy Hines questioned whether an absence of ongoing information about Project One showed that it did not exist; administrators assured her that it does.

The Rambler was unable to identify any specific ongoing activity associated with Project One – McZee characterized it in terms of its general mission, to “expand diversity and inclusion across the university,” but did not name any activity it is conducting to this end, in spite of repeated questioning.

Librarian Susan Brown said that the Project One bookshelf in the library is administered by the librarians without contact with any Project One committee. She said Project One operated “in 2015 to 2016.” Brown is currently a member of the Diversity and Inclusion Workgroup for the campus strategic plan.

On May 3, asked about recent activities by Project One, Dean Covert stated that “Dr. Serenity Wright, Associate Dean for Diversity and International Student Experiences, provided oversight for Transylvania’s Project One Initiatives,” and that division and department chairs had been tasked with responding to Project One’s findings around that time. Wright left the University in 2016.

“We look forward to leadership by Taran McZee, Associate Vice-President for Diversity & Inclusion, in renewing the work of Project One and establishing new initiatives on campus,” Covert wrote.

According to Joe Bahena, a senior, demand #6 was intended to address what he described as the tendency of Transy’s website to showcase the same minority students over and over “and make it look like there’s more minority students at Transy than there really are.”

Sparks responded heatedly, raising her voice as she explained that as a biracial person, she takes the issue of tokenization very seriously. She said that every time her office publishes photos of Transy students, they ensure that the students are depicted accurately proportionate to Transylvania’s racial makeup. She said that while the current website format may appear to show the same students over and over, that is more a function of how photo shoots were conducted and how the website rotates randomly through its stock of photos, page by page.

Sparks said practices have been updated when new photo shoots are being conducted to ensure the same students are not depicted at multiple locations. Additionally, she said she would alter the website’s settings to keep it from rotating photos and the University’s practices when soliciting student consent to be photographed, to ensure students understand their image may appear in all forms of marketing media.

Regarding demand #7, the conversation focused on the possibility of a repeat offender registry for Title IX. In an email sent before the meeting, newly appointed Title IX coordinator Amber Morgan said, “It is illegal to publish a list of Title IX offenders. I strongly discourage any individual or group from publishing their own list as they could be sued in civil court for defamation, slander, and/or libel.”

In response to the demonstrators’ listed complaint that Morgan’s hiring has not been well enough publicized, Morgan named a number of vehicles whereby the hiring was announced, and said she had reached out to one of the demonstrators requesting a meeting to brainstorm ways to communicate her new position.

Demand #10 called for creation of a system for reporting misconduct by DPS officers. Sparks stated that the Red Flag Reporting system is already available on Inside Transy for student use in reporting misconduct by any University employee, including DPS. She said that reports filed in this system are sent to a third party, but remarked on the difficulty of finding and using this system, “I’m going to make this better.”

Demand #11 pointed out long wait times to see counselors, particularly around finals week each semester, and called for hiring additional counselors. Sparks advised that Ashley Hill, Director of Student Wellbeing, is able to connect students with outside counselors as needed during shortages internally.

Students and faculty interviewed after the meeting expressed optimism that change has been promised and voices heard. The Rambler will continue to cover issues of diversity and inclusion as these changes unfold next year.