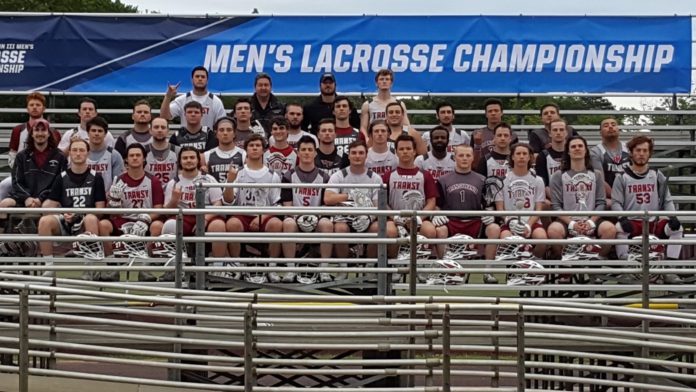 The Men’s Lacrosse team got off to a slow start this season with a record of 1-3 in their first four games. This would not be a sign of how the rest of the season would continue as these would be the last losses for the team in the regular season. The team would go on to win the next 12 games, ending the season at 13-3 overall with 195 goals. Their last game, against the St. Vincent Bearcats of Latrobe, PA, completed a perfect 8-0 conference record when it ended in a score of 12-1. Senior, Zack Riggs got a hattrick and an assist in the game while the game was also Senior Cooper Fogle’s 13th win of the season in goal. The team went 22 for 25v on clears and beat St. Vincent in groundballs 32-29. This final win, earning the team the Ohio River Men’s Lacrosse Conference Championship, was the third consecutive conference tournament title and the third consecutive regular season title in as many years for the Pioneers. What was different this year was what came along with the ORLC Championship, a bid to the NCAA Division III Tournament, the first in program history.

When asked what it felt like, sophomore Logan Fogle said, “Getting to the tournament for the first time in Transy Lacrosse history is an accomplishment that all the guys are proud of. We’re showing that kids from Kentucky have game, and it’s a tribute to every guy on the squad whether they’re from Kentucky or helping to put Kentucky on the map.”

The team would travel to Hampden-Sydney, Virginia to play the Hampden-Sydney Tigers in the first game of the NCAA tournament. The game would get underway quickly as Hampden-Sydney would score off the initial faceoff. They would score two more goals before First-year Trenton Sneed would score the first goal for Transy. This would not slow down the Tigers as they would go on to score four more goals in the quarter. The second quarter would begin with more aggressive offence from the Tigers as they would push their lead to 10-1 before Transy would score again. This point would come from senior, David Smith, and would fire up the Pioneers who would follow it up with three more goals. These goals came from sophomore Josh Mesmer, First-year Paul Stickel, and senior Zack Roby to make the score 10-5. These four consecutive goals would be answered by two from the Tigers, leaving the score at 12-5 at the half. In the third, Hampden-Sydney would score two more goals before Mesmer would score again. This would be the only point for Transy during the quarter as the next five points would come from the Tigers. With the score 19-6 going into the final quarter, the Pioneers would continue to fight with First-year Jack Stevenson and sophomore Ryan Staley scoring. The game would end in a score of 23-8 in favor of the Hampden-Sydney Tigers, with Transy’s C. Fogle finishing his career with an impressive 12 saves.

The season would finish with an overall record of 13-4. In the ORLC, seniors C. Fogle and Clark Watts would be named the 2017 Defensive and Co-Offensive Most Valuable Players. This would be the second consecutive year for C. Fogle earning this achievement. Watts led the Pioneers in scoring this season. Both have been on the team for all three of the ORLC Championships and all three of the conference tournament titles. C. Fogle would also lead the ORLC with his 62.6 percent save percentage and rank first nationally in goals allowed per game with only 5.45 in the regular season. The Pioneers defence would rank in the top five in the nation, allowing only 4.94 goals per game. Along with Watts and C. Fogle, Sneed, senior Rob Rhea, First-year T.J. Toivonen, and sophomore Joe Shermock were all named to the All-ORLC First Team. Roby, Stickel, Riggs and senior Matthew Parker were named to the All-ORLC Second Team. Mesmer would be named an All-ORLC Honorable Mention. Sophomore Chris Schaefer was named to the ORLC All-Sportsmanship Team. Sneed led the ORLC in assists and was fifth in total points. Rhea was the top scoring defence in the country. Toivonen ranked second in causing turnovers in the ORLC, ranked in the top-ten in groundballs and helped earn Transy the best clearing percentage in the nation alongside C. Fogle and Shermock.