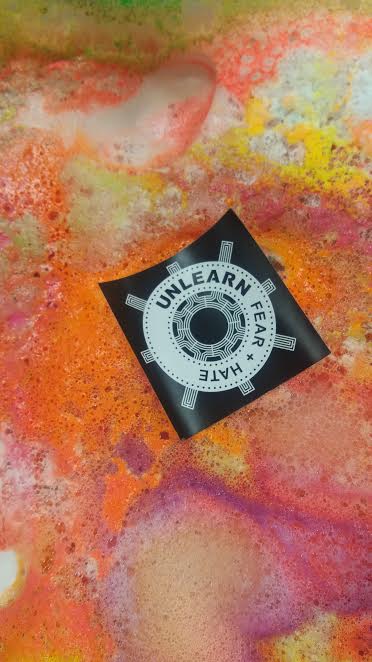 Junior Rebecca Rumentzas, along with other students from her class, carried out a project with students at Lafayette High School. “We could do anything that promoted Unlearn Fear + Hate,” said Rebecca. “We wanted to do something that metaphorically took those away from the people.”

Rebecca and her group approached this task by designing a project that involved students throwing bath bombs into the water as a symbol of releasing their own negative feelings.

“With this bomb, they stood up and stated something that they fear, hate, are stressing about, or something they would like to work on for themselves.” After all of the students had dropped their bath bombs into the water, it “had a blend of scents, colors, and fears, just like we do as people,” said Rebecca.

Although her group expected approximately twenty-five high school students, Rebecca and her group were welcomed by thirty-three. “The students were so intrigued by the art that their fears and hates created,” shared Rebecca.

According to Rebecca, the students committed to the goal of the activity, allowing themselves to be vulnerable and to share their most personal concerns and realizations. Rebecca recalled a moment in which one student compared humans to the rainbow, “having different shades and different colors.” The student stressed that, “we should actually act on what we say and make the world a better place,” said Rebecca.

Moved by the students, Rebecca stated, “seeing such young people come together and to just have those extra shoulders to lean on and not be embarrassed of their thoughts, really gave me the chills.”

Rebecca hopes that Unlearn Fear + Hate will continue to be a prominent theme on Transy’s campus and within the Lexington community.