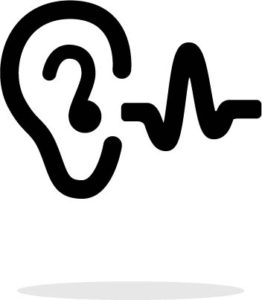 English is my first and only language. Yet it feels like a foreign language every single day. Simple conversations turn frustrating when my friend, a classmate, and the professor turn away or mumble as they speak. I can barely understand anything on the TV or radio. It’s because I’m hearing impaired. I wear a cochlear implant, which is a miracle of bioengineering. Still, even miracles sometimes have their limits.
My cochlear implant is essentially a set of wires and magnets on top of my skull that bypasses the parts of my ear that doesn’t work. An external component that looks like a hearing aid acts as a microphone and sends signals through a magnet to the internal part. In other words, I have a fancy schmancy bionic ear.
My bionic ear is pretty decent at its job. It’s just the matter of getting my brain to translate what the heck all that noise is. As I say over and over again, day after day, “I hear you. I don’t *understand* you. Could you please repeat yourself?” It becomes particularly difficult when I have to have a conversation over the phone as I can’t quite hear what the person on the other end is saying and I have to keep asking them what they said. Hopefully, all of that will change soon though as my friend has recently told me about this hearing impaired phone that is supposed to help people who are hard of hearing. I’m not quite sure how it will work, but it’s definitely worth having a look at, as I’m starting to dread making a phone call now. I just don’t like it when I have to keep asking people to repeat themselves.
I studied Spanish for five years and could read and write at a passable level. But when it came to speaking, I would never be able to tell you if I was hearing Spanish or just a conversation in English that for some reason I couldn’t get my brain to understand. Yes, it’s that bad. Don’t even get me started on trying to connect what I heard with the Spanish words I knew on paper.
When I arrived at Transylvania, I knew I couldn’t continue with Spanish. I took Latin to fulfill my language requirement. One of the good reasons for keeping a dead language around for study is that it inadvertently accommodates people like me. Latin is inclusive in its own way! No discrimination based on hearing ability! Good, solid, clean fun for all liberal arts students, even deaf ones.
I’ve been very lucky here at Transy. Professors bend over backwards to help me understand everything in the classroom. Every student I’ve spent time with has been nothing but understanding. I have friends who even sometimes find my deaf jokes funny. I sometimes wish I had perfect ability to understand what I hear, but during my time here, I’ve learned that I do just fine. Mostly. A few embarrassing misunderstandings there and there, but I’ll deal. Language is slippery for everyone, right?
I still have to say, thank goodness for people who understand when I struggle with English like it is a foreign language. And thank goodness for dead languages.