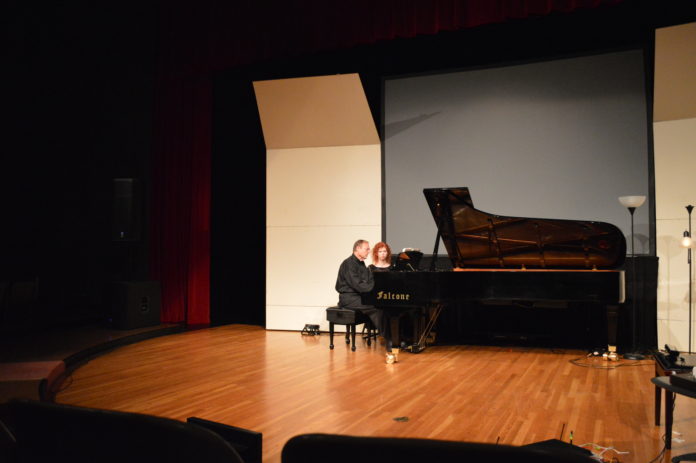 The first piece displayed was Strecker’s “Pine Mountain Forest Portal,” a video animation projected onto a screen in on the stage of Carrick. Originally designed for the apse spaces of Christ Cathedral, where it was first debuted. Strecker’s piece reflected what looks like a kaleidoscope filled with colors from photos and videos of the old growth forests on Pine Mountain in southeastern Kentucky. Shaped as a mandala, Strecker’s piece plays a reflection to the mountain area and all it’s wildlife and all of it’s diverse and natural life. Dr. Polashek’s piece, “A Prayer For Our Earth: Pine Mountain” also tributes Pine Mountain and the conservancy of the area. Set in the middle of the stage was a small stand holding Pope Francis’ “Prayer for Our Earth” illuminated by a warm lamp shining down on it. Polashek recorded sounds from the top of Pine Mountain and also his daughter reciting the prayer. Together he composed these recordings into an emotional piece relaying the importance of our earth and it’s need for our care. With the music purple, blue, green, and red lights illuminated the back drop of the stage and moved along with Polashek’s composition while the lamp dimmed and raised it’s light with the volume of thematic. Together each piece of artwork presented the audience with a captivating tribute to the Pine Mountain Area.

Polashek presented another composition, “Garden Rain” which Angela Eaton played on the piano. The melodic tune carried softly on the piano, putting the audience into a melancholic trance as Eaton’s hands danced across the keys. Polashek wrote the piece in dedication to his grandparents: Rosaline Polashek, C. Robert Pedersen, and Elizabeth Pedersen, “the latter who passed away while I was editing the recorded takes of Garden Rain for release on my Wood and Wire CD,” Polashek wrote in his description of the piece. On piano after Eaton was Dr. Barbara Rogers who performed four original compositions from a set of songs she titled “Maine Musings.” Rogers chose to accompany poems written by her great-aunt Ramona Carle Woodbury for a small volume titled Along the St. George’s. Singing each piece was Ms. Brittany Benningfield and Dr. Daniel Koehn. Benningfield sang of a wish for summer to remain and in another song of a cat’s devotion to its naps. Koehn’s voice carried the story of a misfit grandfather who never lived to see his work be revered and his second song, the beauty of the Earth. Roger’s piano brought the anecdotes to life with emotion and passion for each tale.

Dr. Larry Barnes was the next to bring technology back to the stage with his piece “Max Does Tai Chi 24” which combines two of his passions–Tai Chi and computer programming. Barnes, who earned a black belt from grandmaster Sin The in 2012, performed Tai Chi 24 the first form that a student will learn in front of a camera that monitored his movements. Each movement of Barnes’ controlled the instrumentation of the music playing, which in turn created a completely unique and original composition. To put Barnes into a meditative state, a drone continuously played with the music and carried his movements. Moved by the energy of his movement, Barnes shook from his feet with the energy flowing through his body. Something that he said before his performance is not his own doing, but caused by the energy that Tai Chi builds.

After his Tai Chi performance, Barnes performed his composition “Wander Fantasy: Hibernia” on piano. The piece was inspired from the area of Hibernia, referred to as “the most hideous land with the foulest weather, densest terrain, and the most barbaric, primitive race of people.” Because of this the area was left to maintain its own culture and music, which preserved the sean-nos’ style of singing, springy and highly-adorned songs about love and trouble, sung in Gaelic. Barnes’ piece, although lacking words, did not lack emotion within its sounds. The piece showed Barnes’ creativity and dedication to the creation of music. Following Barnes on the piano was Eaton and Dr. Loren Tice who debuted a piece called “The Heist,” composed by Dr. Polashek for two people to play as a duet. Sounding like organized chaos, the piece was hard to wrap your head around as Eaton’s and Tice’s hands beat across the keys, displaying styles of many different genres, shifting in rhythm, cadence, and key.

Dr. Polashek and his brother Matthew Polashek ended the show with two different electronic pieces. “Warp Speed”, a piece played on the saxophone by Matthew was manipulated and warped electronically as it was played. Matthew controlled the electronic component of his piece with three pedals underneath his feet, creating a sound more alien-like than that of a saxophone. Dr. Timothy Polashek then took the stage with his brother and performed their piece titled “Bluetooth Rave,” where the two created a “jam session” controlled by Timothy Polashek’s Wii remote and a double bass bow with attached sensors to monitor his movement, while Matthew Polashek played an electronic wind instrument. The two created sounds that are not expected to come from a collegiant theater, but from an electronic music festival. The brother’s enjoyed themselves while playing together and interacted well as their unorthodox instruments came to life.