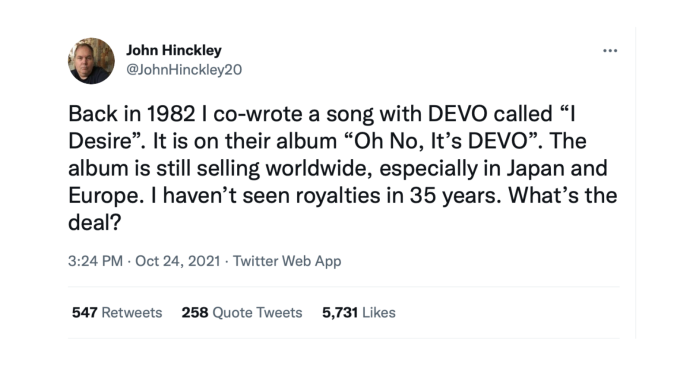 On September 27th 2021, Mr. John Warnock Hinckley Jr. was given only one more year before all federal restrictions are completely lifted. You may remember him from his attempted assassination of 40th U.S President Ronald Reagan, for which he was found not guilty by reason of insanity and sent to St. Elizabeths Hospital in Washington D.C.  “If he hadn’t tried to kill the president, he would have been unconditionally released a long, long, long time ago,” says U.S. District Court Judge Paul L. Friedman, though that seems like a pretty big “if.”

Maybe it’s the intensive studies conducted on Hinckley over the past four decades that led to this, or maybe it’s the recent creation of a YouTube channel (launched November 2nd, 2020) and the even more recent Twitter account (first tweeted October 19th, 2021) that influenced the ruling.

These accounts almost exclusively consist of Hinckley talking about / singing / promoting his own original songs, with a few covers here and there as well. Surprisingly so, it often comes off as much more charming than unsettling — the 720p iPhone-recorded YouTube videos of him strumming away at a guitar and belting out his original songs against a beige wall feel like something your uncle might do in his spare time.

Not to humanize a murderer in any way (and one with extremely questionable motives, as the attempted assassination was inspired by Martin Scorsese’s 1976 film Taxi Driver to impress a very young Jodie Foster), but this is such a strange development in the story of someone who, for the past few decades, was only really mentioned in passing. The comparison could easily be made to O.J Simpson’s bizarre return to the public eye with his release from prison in October of 2017 and the subsequent creation of his own Twitter account. This is creating a pretty strange trend of “guys being released from federal restrictions in one way or another and then returning to the public eye via social media but refusing to acknowledge their past.”

However, the strangest development came when, on October 24th, 2021, Hinckley claimed to have co-written a song by popular 80’s synth-pop band, DEVO, complaining that the song, titled “I Desire” was featured on a hit album and he has yet to see any royalties from it. The “co-writing” Hinckley is referring to here is actually an obsessive love poem that he wrote to Jodi Foster back in ‘82 during a period when he was stalking her, which became public after Hinckley’s arrest.

DEVO’s Gerald Casale was apparently floored by the pure sociopathy on display in Hinckley’s poem and is quoted saying that “I saw it and I showed it to (fellow band member) Mark Mothersbaugh. We couldn’t believe how inspired and pathological the poetry was, given what he had done.” Casale also claims that Hinckley gave the band permission to use the poem and that the distribution of royalties was the job of the record companies, not the band members themselves.

All in all, Hinckley’s social media arrival has just raised more questions about his case and the effect of social media in general — is he truly “reformed” and just trying to live a normal life? Is he putting up a front? Is he using his checkered past as a way to revive his failed dreams of being a successful singer/songwriter? Who knows! But his songs aren’t half bad…