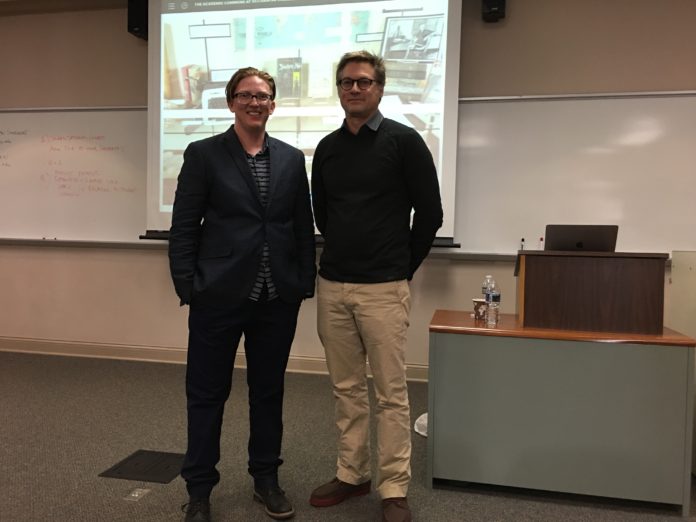 Several weeks ago on Thursday March 22nd, there was a rather exciting presentation in Cowgill that could impact the future of digital liberal arts on our campus.

This presentation was given by Dr. Jacob Sargent and Dr. Christopher Gillman from Occidental College in Los Angeles, California, whose notable alumni include former President of the United States Barack Obama and Hollywood actor Ben Affleck.

The presentation given by the two professors from Occidental was more geared towards faculty than students, but it was nevertheless fascinating. It presented ideas to the Transy faculty members on how they can integrate digital media into their classrooms to revitalize interest in the humanities.

Over the two days they were here at Transy, the professors met with faculty members in the digital arts and media and music technology department, faculty in the computer science department, library staff, and the IT department; they also toured spaces on campus and took part in more activities.

They discussed several changes they’ve implemented at Occidental in recent years, such as the renovation of Johnson Hall. It was re-opened in 2013 after undergoing a similar transition/renovation as Haupt Humanities here on campus has. The re-dedication of Johnson Hall came in 2014 when it then became The Mckinnon Center for Global Affairs, (just like Haupt is becoming The Carpenter Center). This renovation included the installation of a media wall that has won several awards in architecture and display technology.

Occidental College created a critical making studio that helps students think about the technology in our world and helps them cultivate creativity with technology such as an audio booth, 3D printer, cameras, and even Occidental’s own student record label.

The digital arts initiative comes from the desire to integrate digital literacy into the liberal arts curriculum in order to make it more contemporary and to maximize the resources we already have to help students get the most value out of their education here at Transy. Dr. Sargent and Dr. Gillman said that we can hook digital arts to our strengths and values as a school, like connecting the library to digital arts and media and re-vamping digital arts  programs like music technology, business technology, and computer science, to name only a few.

While this is just one example, they had many ideas for how we could integrate digital liberal arts into our curriculum as a whole and how it would benefit students in the future, as well as how we can set examples for other schools in the process. This initiative could provide not only students and professors with more creative freedom for collaboration, but it could also benefit the surrounding community.