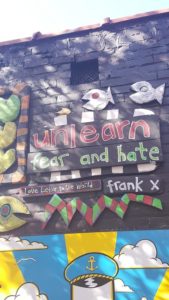 Emerging through a two-fold process, Unlearn Fear + Hate originated as a response to two conversations concerning race relations; one at the national level and one at the local level. The national conversation circulated around the 2015 terrorist shooting that took place at a predominantly-black Charleston, South Carolina church. As the nation responded to the massacre, Kurt Gohde and Kremena Todorova, co-founders of Unlearn Fear + Hate, gained greater insight into the issues that racial violence posed onto members of society.

“By no means was an increase happening in occurrence of the acts. It was just increased visibility due to social media and  citizen journalism and different ways to share,” said Gohde.

Because the duo had completed three tattoo projects in various cities, they “were Facebook friends with a lot of the participants, and [the participants] lived in different cities,” allowing them to see the influence of race violence from many perspectives, shared Gohde.

The local conversation grew after the event when, “a lot of confederate statues were questioned,” said Gohde, including two in Lexington. The controversial pieces continue to stand in the Cheapside area of downtown, historically recognized for being the largest slave trade location in Kentucky. When the Lexington community was invited to share their opinions regarding the removal of works, it was obvious the fear and hate that their opinions were founded on.

“Unlearn Fear + Hate came out of that… awareness that people could not see each others’ humanity at all,” said Todorova. “Our intention was… to use art to invite people to see each others’ humanity, not to point fingers, but to ask people to recognize ways in which we are all fearful of each other and maybe ways in which we cause fear in others, and try to refuse to be passive. We realized that this artwork shouldn’t just be about race and race relations, that our fears are many and have to do with many different issues; a lot of them are identity issues.”

Making their way into communities throughout Lexington, Todorova emphasizes the importance of the stencils stimulating individual growth, sharing, “We hope that being involved in the artwork leads to personal change, inner change, which also leads to social change.”

Gohde points out how such social change is being interpreted by the community.

“What has become interesting is how many people think of it as a movement, and it’s not connected to individuals, which is really fantastic,” said Gohde, “That [the idea of Unlearn Fear + Hate being a movement] is something that also allows people to respond to it,” said Gohde.

The power of social media is evident in how Unlearn Fear + Hate has made its way into communities outside of Lexington, showing up in places like Austrailia and South Africa.

“One of the ways in which people engage is by being photographed in front of this sculpture so that it becomes like a halo around them with the words ‘Unlearn Fear + Hate’ right around their face,” said Todorova. “We see that being photographed as engagement with the artwork. So at the very least you have to consider are you fearful, or are you hateful in some ways?”

The circulation of these photographs, often by social media, makes for a quick spread of the ideas attached to Unlearn Fear + Hate.

“Part of our Facebook web, of people we are connected with, includes quite a few parents of first-year students, that only really became involved because the students were there,” said Gohde, noting how the August Term event that took place on Bourbon Street led to Unlearn Fear + Hate making a direct line back to students’ families.

Gohde and Todorova vocalized their appreciation for Transy’s administration to make Unlearn Fear + Hate a central theme of academics, but Todorova explained they also wanted to make sure it would not “just become another slogan.” To prevent this, they make an effort to present a lesson with each art project, in which they share with students the need for such a theme in our curriculum.

While reaching the Transy community through larger campus events has been successful, Unlearn Fear + Hate has entered classrooms in more explicit ways. According to Todorova, many faculty members have contacted her and Gohde about wanting more information about the theme, in order to make it a part of their own courses. While Todorova wants to get more faculty and students on board, she does not want to threaten academic freedom.

“Academic freedom is a good thing. No one could have said, ‘Here’s this theme. Can you teach it in your classes?” said Todorova.

The duo co-teaches a May Term course, called Community Engagement with the Arts, that has evolved to focus on ideas associated with Unlearn Fear + Hate. This year, the course will consist of Transy students creating flowers, made from plastic bottles, with school aged children from surrounding schools. Children will learn about the history of Cheapside and learn about sustainability. The number of flowers placed in the Cheapside area will be historically and mathematically based on the number of slaves sold in the area.

“There might be one flower for the number of children that were sold while it was an active slave auction,” said Gohde.

Students, staff, and faculty are encouraged to join in Unlearn Fear + Hate’s next big on-campus event, which will take place on Thursday, Nov. 10 from 8-10 p.m. in the Campus Center. The event is being hosted by Chi Omega and Order of Omega. Chi Omega Vice President Dakota Porter initiated the event with a goal of promoting conversation “about Unlearn Fear + Hate.”

“This event isn’t about cross-stitching, necessarily. It’s about learning about one another and how we can, as a community, participate in this narrative and do our part for Lexington and the world,” says Porter. The event is open to everyone, both in the Transy community and in the greater Lexington community. Kurt and Kremena will provide participants with a demonstration of cross-stitching. Porter stated, “whenever you’re cross-stitching, it’s easy to be doing it and just sit around and talk,” explaining why cross-stitching as an art form is beneficial to stimulating discussion and awareness of Unlearn Fear + Hate. “Whenever you’re with someone and creating something actively, I think that that creates a bond and also bridges these walls that we have built up for ourselves, between individuals,” says Porter, voicing her perspective on the ideas of social art projects.

Porter and Kurt and Kremena encourage all who are interested to join the Facebook group for the event and/or email them for more information.