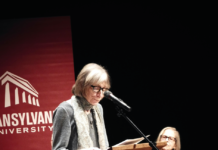 A story told through nature

A recording from 2005 has just recently surfaced, and it includes the Republican Presidential nominee, Donald Trump, using extremely explicit terms describing him “pushing” himself on women.

Trump has been accused of being a misogynist many times over, and this video just confirms it. These comments, from a presidential candidate, discredit him completely. Trump released an apology where he stated that the comments he made do not “reflect” the man he is today in any way. This is ridiculous; just because this was captured over a decade ago does not excuse Trump for his actions. He claims that this story is just a “…distraction from the important issues we are facing today.”

One important issue that we are facing today, Mr. Trump, is oppression of women in modern society. There is never a time when a woman should be objectified and talked about in such a disgusting way. It is simply inexcusable. I was very surprised that Trump apologized at all, but apologizing and then immediately denouncing the act as unimportant does not help anything. A presidential nominee should never act like this.

Luckily, some important GOP members have realized this. Here is a list of some GOP members that have decided to hold Trump accountable:

For some of these members, the leaked video was the last straw. They all have their opinions on Trump and they have decided that he is not fit for the presidency. What is interesting is that their opinions are very similar to a certain senator’s opinions; however, this senator is still for Trump: 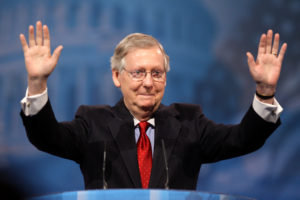 Mitch McConnell is a six-term senator from Kentucky, and he has been a major leader within the senate for decades. After seeing the video, McConnell had this to say:

“As the father of three daughters, I strongly believe that Trump needs to apologize directly to women and girls everywhere, and take full responsibility for the utter lack of respect for women shown in his comments on that tape.”

Currently, even after denouncing Trump’s various comments numerous times, he is still going to back the Republican nominee. This brings up a more serious problem rampant in today’s politics. People are voting for parties rather than candidates, especially in national elections.

In Kentucky, we are historically represented by Republicans at the national level but we usually vote Democrat in state elections. This year we elected a Republican governor, Matt Bevin, and it has really clarified the problem.

Kentucky has around 500,000 more registered Democrats than Republicans, according to this Voter Registration Report from 2014, but Republicans tend to be more well represented. Why is this? Well there is no way to really know exactly why, but I would say that voter apathy, conservative democrats and republicans voting “straight ticket” has a lot to do with it. 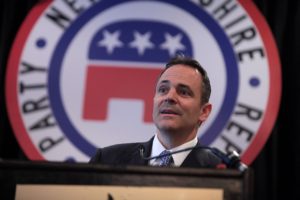 Voting for a party rather than a candidate can have a serious effect. Kentucky is a perfect example of this. Say what you will about Jack Conway, but Matt Bevin was definitely not what you’d call the best choice. He attacked education and the arts openly and immediately created controversy as soon as he was elected. He has repeatedly abused his power, he has abolished the University of Louisville’s entire Board of Trustees for a problem that could have been easy fixed through a judicial process and tried to cut funding from state universities (this action was recently overturned due to a legal ruling against Bevin’s plan).

This idea of just voting for someone because of their party is a serious issue, it has seriously hurt Kentucky and Kentuckians. And if, after this latest controversy, McConnell does not do something, it will seriously hurt our nation.

McConnell simply deciding to not vote for Trump is admittedly not going to change a whole lot, but I think that if the Majority Leader of the U.S. Senate were to openly declare that his vote was not going to Trump, I think many GOP members that are on the fence would be more likely to follow suit.

I am not trying to prove that Trump is a very poor choice for President. Many people have done that for me already, including both Senator McConnell and Trump himself. I just ask that McConnell realize that this country is a democracy, a democracy run by good individuals who want to make America a better place, and not a collection of political parties.

If you wish to express your concerns for where the Kentucky vote will go during the presidential election, you can contact Senator McConnell here. Politicians are here to serve you, so please let them know what you are thinking.