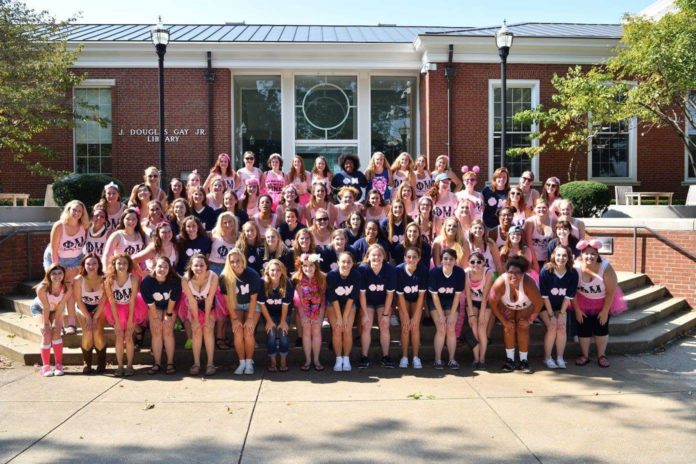 Coming into college, the thought of joining a sorority never crossed my mind. I had planned to play softball, major in neuroscience, and join the newspaper; that’s it. After living here for a few weeks I began to realize I didn’t know what I really wanted. My roommate was dead-set on rushing, and I talked to multiple upperclassmen that told me to rush, even if I knew I wouldn’t join a sorority. I talked to my mom about it, and we decided that I might as well just go through it to meet people.

Then, all the Greek activities began to start. My group of friends and I would talk to multiple girls affiliated with Phi Mu, and I actually began to think that joining their chapter would be pretty fun. I’d never seen myself as a sorority girl, but just hanging out with them made me want to be a part of something.

I didn’t know at that point, but just going through the process of recruitment brought me so much closer to the friends I already had, and I am so glad that we all found our new homes on bid day. Before actual recruitment, we all came together in my room and discussed what outfits to wear- because you don’t even understand how stressful the entire process is. We went to each of our rooms, and looked at all the clothes we brought with us to figure out what each of us would wear for each day.

Then, recruitment actually began. We weren’t all in the same rho gamma groups, but every night we would meet after the parties and discuss what went on and what we were all thinking. I fell in love with my rho gamma group, too. The entire process brought me so much closer to so many different people. My rho gamma was so sweet and welcoming, and she really helped make recruitment so much less stressful that I would have made it. I texted her every day to make sure she approved of what I was going to wear, she was the best.

After the first night, I knew I loved Phi Mu, but I was keeping an open mind, and I really liked Chi O, too. I met so many sweet girls, and I am so thankful for the experiences I gained from recruitment. As the nights went on, Phi Mu and Chi O were still my favorites. Even after preference night, I didn’t know which one I wanted. I could picture myself in both, and I truly loved all the girls I had met and talked to throughout the parties.

Bid day came, and I didn’t know what to expect, I was so nervous, but I knew I’d end up where I was meant to be, and looking back now, I know I made the right choice. We watched the boys run out before we got our bids, which was extremely fun, and extremely suspenseful. I loved seeing all my friends run out to their new homes (which for the most part was Sig). My emotions were crazy, as were all of my friends, and my rho gammas. We were all beyond excited, slightly nervous, and just ready to get our bids.

After the boys’ run out, all of the girls headed to Beck, where we stayed with our rho gamma groups, and got our bid cards. There was a countdown, and then instant screaming, crying, and laughing. There was so much happiness in that gym, and immediately my friends and I met up, where we found that 5 of us got Phi Mu! To say we were excited would be an understatement.

Then, we got to have our run out! The girls run out is different than the boys, we hid behind flags, and then ran out to our sororities two at a time. I got to run out with one of my bestfriends, the other Kelsey that joined Phi Mu. You get attacked when you run out, there’s so much screaming, and they shove a shirt over your head. It was probably one of the best experiences of my life. I had so much fun, and my adrenaline was so high, it was insane. After all of the girls ran out, all of the unaffiliated rho gamma’s and Panhellenic council ran out, too. It was fantastic, because my rho gamma ended up being a Phi Mu! I was so happy for her, and for myself, and then the Panhellenic President ended up being a Phi Mu, too, which was pretty cool to get to say that she’s one of my sisters.

Once the run out was over, we went back to the chapter room, and then went and partied at a park where we got to meet all of our new sisters and play games. This part was exhilarating, because there were just so many people that were so excited to see all of us, and become our friends. I knew at this point that I had made the best decision for me, and that I would love these girls, and make so many new friendships. Since that day, any time I pass someone on campus, or go to eat in the caf, I always have someone to sit with or talk to, and it has truly been amazing. I love all my new sisters, and they make me feel like this is home.

To anyone who is on the fence about Greek life, I’ve only been a part of it for 2 weeks, but I can honestly say it has changed my life, and certainly made my future here on campus something not to be afraid of, because I know I have sisters to help me all the way.